We have had many disastrous floods over the years, but the one foremost in our minds was the flood of 1950. Let’s compare the 1950 flood with other major floods on the Red River:

All of the above were topped by the legendary flood of 1776.

Manitoba lies in a gigantic drainage basin which extend seats to Ontario west to Alberta, and south to the headwaters of the Mississippi River. This huge area is drained by several major rivers, including the Red, into Lake Winnipeg. When the Red River overflows its banks a large area is subject to flooding. ln 1950, the Red flooded over 500 square miles, 10,500 homes were flooded and 100,000 people had to be relocated.

Historically, and with a certain amount of probability, the Red River could be expected to flood as great or even greater than the 1950 flood, on the average of once in every 36 years.

So, after all the engineering studies were completed, and developed, it was decided to build a flood wav in Manitoba. The overall planning. design and .supervision was under the direction of The Water Control and Conservation Branch of the Province of Manitoba- It was to be a cost share project between the Federal and Provincial Governments.

The giant engineering feat began on Oct. 6, 1962 when a powerful bulldozer gouged a chunk of earth and launched what was to become one of the biggest excavation projects in Canadian history. 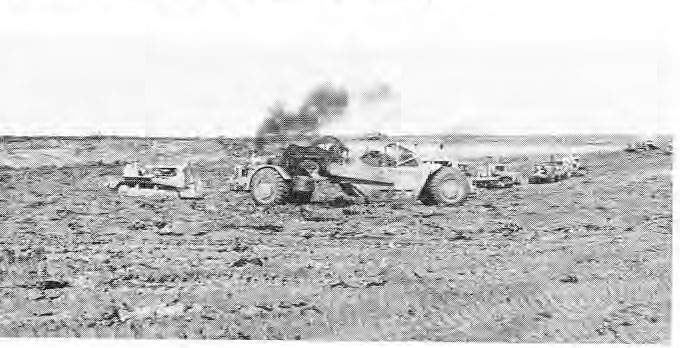 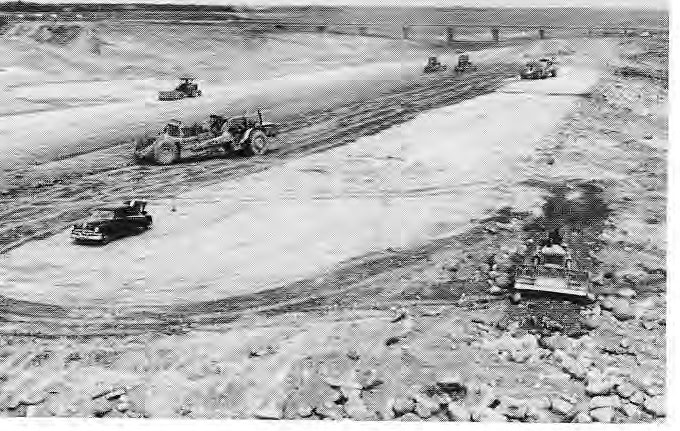 The floodway project affected many people within its 30 miles of length. The CNR and CPR Railways had to construct 6 bridges to cross over, the province of Manitoba had to built 6 bridges re: their Trunk Highway and Public Works network, The public Utilities such as Manitoba Hydro, City Hydro and Greater Winnipeg Gas Pipe Line were also involved with the transmission line crossings.

To us, here in St. Clements, it involved the appropriation of land from our river lot systems, the overcrowding of our Gonor School b) the children of the workers who were living out of trailers at Lockport and the inconvenience of having one of our main highways cut off for a time. It sparked a lot of interest in our community and it was common to slip down to the site and view the big machines in progress. It cut our Henderson Highway off and caused a few businesses to cease operation. 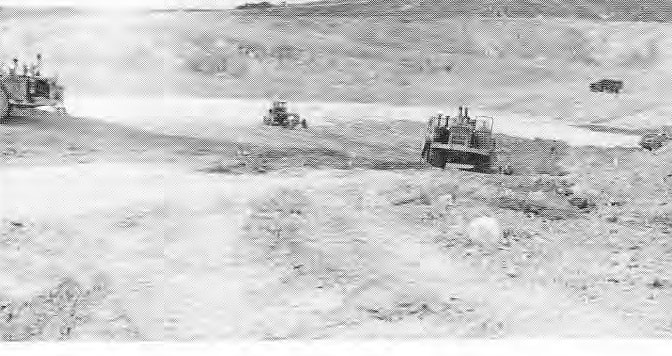 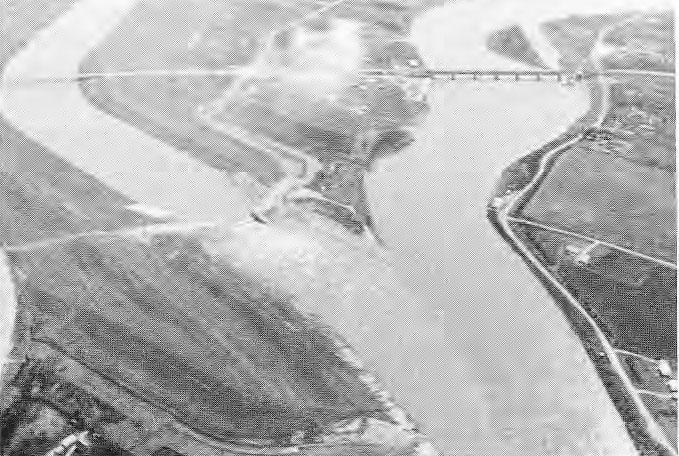 There was not many miles under construction in our munc., but we had the “outlet control structure” built, just north of Lockport, and this was quite neat to view as it was being built. They formed and poured about 16,000 cubic yards of concrete and used a lot of reinforcing steel in the structure, estimated to be 620,000 pounds. The gradient differential of the outlet is about 14 feet. The H.G. Acres Company from Niagara Falls, Ont. built this huge edifice. 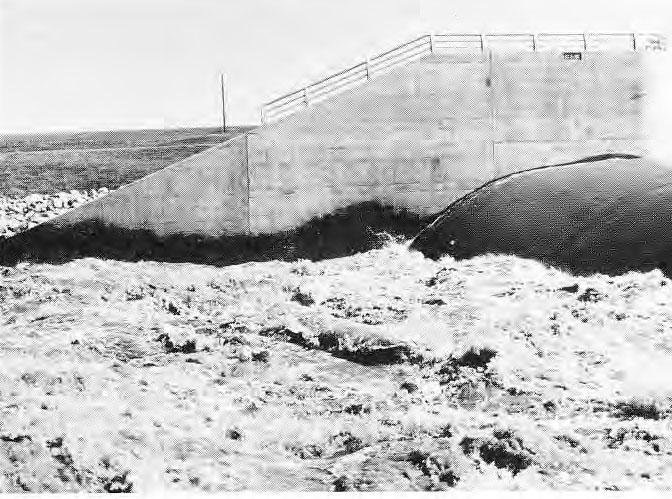 This outlet structure plays an important part in the overall function of the floodway system. The floodway, under design conditions, has a water surface drop of some l8 feel from the inlet to the outlet. The corresponding water surface drop in the Red River is about 32 feet, a difference of some 14 feet. Therefore, a drop structure is required to reduce the potential energy Its  the water and to provide an outlet alignment that will not induce scour in the river downstream of the junction point at Lockport. This structure, as you can see from the photograph, is constructed of mass concrete with a concrete rollway and stilling basin incorporated into the design.

The whole floodway allows all the water in the Red River to flow through the City of Winnipeg during normal summer, fall and winter months. But in the spring, when the discharge is greater than 30,000 cubic feet per second, then the water flow is divided between the Red River and the Floodway.

The amount of water diverted into the floodway is regulated by a control structure. This structure maintains the Red River’s natural level upstream of the floodway but allows up to 60,000 cubic feet of flood water to enter the floodway and by-pass the City of Winnipeg.

The project was completed in 1968 at a total cost of $62.7 million which was cost-shared between the Province and the Government of Canada.

During a wet spring the road under the Floodway Bridge spanning Highway No. 44 (Henderson Highway), floods quite badly but we have alternate routes we can use. Just east of the floodway (off hwy. 44) we have named a municipal road in honor of this giant undertaking “Floodway Drive”.

The floodway is used (in our munc.) for a multitude of recreational activities.

The major events in summer are the many mini-bike trails, target practice, rock hounds, training of dogs (obedience) and picnics, and just going for walks on a nice summers day. In winter, the slopes offer a grand place for tobogganing, sleighs and the novice skiing public. Crazy Carpets are fun and you can see them twirling down the two levels of hills. Snowmobiles use this area greatly and you can hear them straining up and down, all in a long row, breaking a fresh trail after a heavy snowfall. The hay which grows is cut in the fall and you can view the huge hay bales dotting the landscape. People from the city come out in great numbers to wash their vehicles in the floodway waters.

The residents of St. Clements have trails that cross the floodway all along its route at the north-end. One in particular, at about Dunning Road off of No. 202, was used considerably starting in the spring right after the ice melted. There was a nice elevation for crossing. Then the dredge cleaned out the channel and deepened it, causing a few surprises, we might add, to those unaware. However, people relocated the rocks and made new crossings, to cut off the distance from Henderson to Hwy. No. 59 etc. If you want to hit the Pine Ridge Trailer Park from Henderson Hwy. or Hwy. No. 202, you just shoot over the floodway and within seconds, you are there. It is an adventure not to be forgotten after a rain or in early spring, but in the dry times of summer, it’s like travelling the No. 1 Highway.

There have been several feasibility studies researching the recreational possibilities of this floodway, but nothing has been organized as of this date.

In conclusion, when the watersheds are holding above normal soil moisture and the Red River reverts to the behavior of Lake Agassiz, thousands of people flock to our municipality to view the division of waters and the northern outlet structure, not far from one of the few “elevated spots” reported by Governor George Simpson to the HBC during the great flood of 1826. 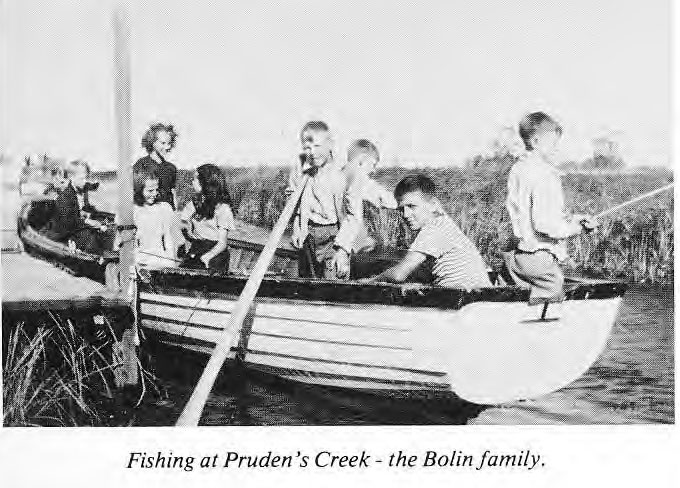 Sandy Point was approximately six miles from our home. Sometimes, we would go by boat on the Red River, until hitting the bar at Lake Winnipeg. Other times we would go by horse and democrat. We had to cross a bridge over what was called Pruden’s Creek. In the 1950 Flood the bridge was demolished, and as it was not repaired thus came the end to Sandy Point.

Sandy Point was very popular as a swimming and picnic area. There were many summer cottages along the lake shore. 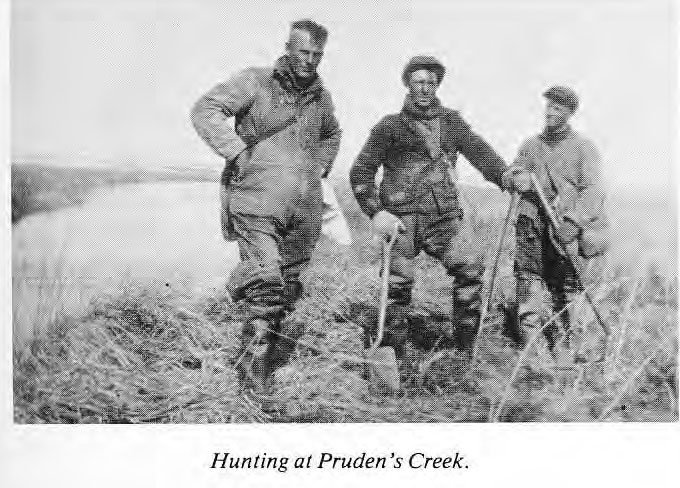 Long Bridge was built across the marsh at Beaconia. It was approximately 1/4 of a mile long. It was built in the 1930’s. Norman Thomas drove the piles. He used a Model T Ford. He lifted the hammer in high gear and let it down in reverse. It was covered with poles. The cutting, hauling and nailing of the poles was all volunteer labor. The money for the pile driving was collected, and a big portion of it was given by Albert Trapp. 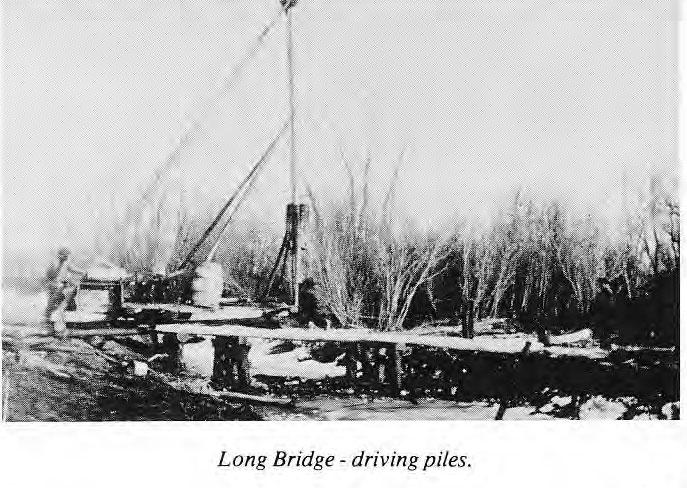 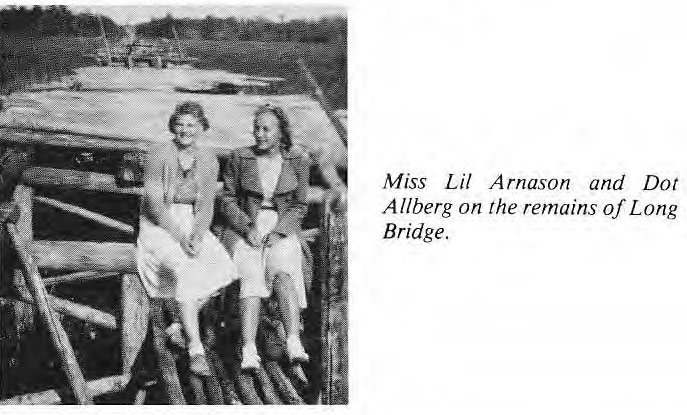