Who build the Canadian National Railway? 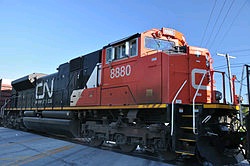 Some of the local railways it purchased included:

The First President of the Canadian National Railway 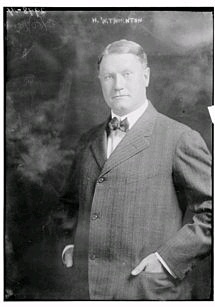 BEFORE THE CANADIAN NATIONAL RAILWAY

It took its first step to compete with the Canadian Pacific Railway when its owners built a line linking the Prairie Provinces with Lake Superior at the harbour of Port Arthur- Fort William (Thunder Bay, William Mackenzie     Ontario).To make this line possible, the tracks were laid from Winnipeg, Manitoba to Lake of the Woods in Ontario then extended south into northern Minnesota (USA) Donald Mann before heading northeast through Rainy River District to Port Arthur (Thunder Bay). The line extended to Toronto, Ontario and eastward to Cape Breton Island, Nova Scotia. They also built a western line from Winnipeg to Edmonton and Jasper, Alberta through Yellowhead Pass toVancouver Island. Their efforts created the second transcontinental railway in Canada. 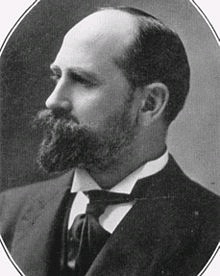 William Mackenzie and Donald Mann also purchased the American interests of the failing Northern Pacific Railway (NPR) that had a line from Winnipeg to Emerson, Manitoba near the Canadian/US border. They called it the Manitoba Line (Manitoba Railway). The Manitoba Government and an American rail line, the Northern Pacific, jointly owned these two companies. In 1889, the Northern Pacific and Manitoba Railway built a repair shop in Winnipeg north of the historic junction of the Red and Assiniboine rivers. They also built a machine shop, blacksmith shop, engine house, and a ten-stall roundhouse and turntable. When Mackenzie and Mann purchased the Northern Pacific in 1901, these buildings became part of the Canadian Northern Railway (CNoR) and then the Canadian National Railway (CNR). The property became the basis of the CNR East Yards. 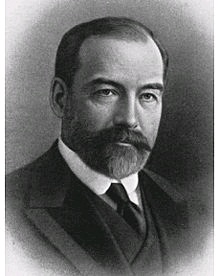 In 1890, the company built the Manitoba Hotel, said to be the grandest hotel between Montreal and Vancouver, beside Water Avenue Station. Sadly, in 1899, the hotel burned to the ground. This was a severe financial blow to the young Northern Pacific Railway Company. Mackenzie and Mann purchased the financially troubled railway a few years later.

THE PURPOSE OF THE EAST YARDS

The Canadian Northern Railway (CNoR) opened their service to the municipality of St. Clements in 1914, bringing passengers from Winnipeg to East Selkirk. Some passengers rode the train because they were en route to Victoria or Grand Beach. They transferred from the train to a boat at East Selkirk. They went to the beaches to picnic on the white sandy beach and swim in the warm, swallow waters of Lake Winnipeg. More and more people arrived in East Selkirk to do this so the Canadian Northern Railway continued their tracks northward to the beaches.

It took the labours of many men to build the rail line. First, they had to survey the best possible route to the beaches. Then, they had to clear trees and brush from the ground to make way for the tracks. Next, came the task of leveling the ground. The workers used horse-drawn graters and scrapers to level the ground before hauling gravel to the site and spreading it evenly along the pathway. Another set of workers hauled the steel tracks to the site, laid them down manually, and held them together with iron spikes. As the tracks reached northward, the workers often took their families to the beaches to live in camps when the weather was warm so the family could be together. Other men had their families travel to the beaches on the weekends or on special days to enjoy a day of picnicking and swimming. 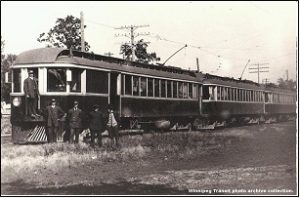 In 1914, the railway company purchased a 150-acre homestead at Grand Beach to develop a resort. Construction on a massive dance hall pavilion began soon after. It was completed in 1915. 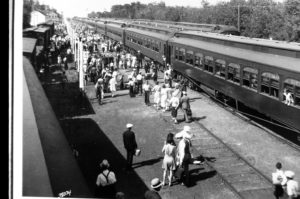 The first passenger train arrived in Victoria Beach and Grand Beach in the summer of 1916 with stops along the way. The company built large wooden tanks at Grand Beach to hold water for the steam engines and they built a train station for passengers to get on and off the train at both locations.

Following the construction of the dancehall, the railway built bathhouses along the beach where they rented bathing suits to beach visitors. They also built food concessions, and a long wooden boardwalk along the beach to the north lagoon. 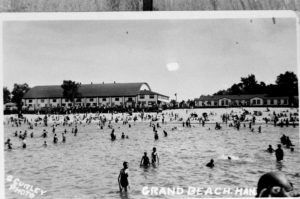 In 1916, the railway company offered passengers weekend specials to travel to Victoria Beach. The train left Winnipeg on Saturday at noon and returned the following Monday. Weekend accommodations and fare cost $1.75.  Anyone wanting to stay at Grand Beach had to assemble his or her own tent until 1920 when the railway built the Grand Beach Hotel. 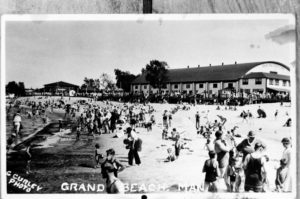 During the years of World War I (1914-1918), money was tight for Canadians and train travel declined. The owners of the Canadian Northern Railway were heavily in debt. With the decline in revenue, they were unable to continue to provide rail service. They requested financial aid from the Canadian Government and received it. However, in exchange the government gained the majority of control of the company shares. The company was nationalized on 6 September 1918. William Mackenzie and Donald Mann resigned. Canadian Northern Railway (CNoR) became Canadian National Railway when it consolidated in 1923.

Rail transportation was popular for many years, but as more people began building cottages and homes in the region, they wanted better access to them. The government built a highway to Grand Beach. Train activity lessened with less and less passengers. Passenger train service ended in 1961.  In 1963, the railway tore up its rails and with the end of the railway came the end of a wonderful era. 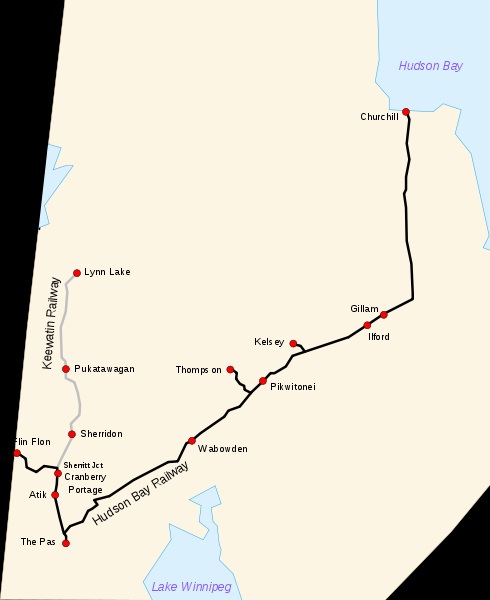 In 1929, the Canadian National Railway completed a rail line from The Pas, Manitoba to Churchill on Hudson Bay, a distance of 1300 kilometres (810 miles). It was called the Hudson Bay Railway. The train carried grain to waiting ships docked in Hudson Bay. The ships carried the grain through Hudson Straits to the Atlantic Ocean and across to Europe. This route was closer for prairie farmers to ship their grain than transporting it on train to Port Arthur (Thunder Bay) in Ontario where other waiting ships would carry it to Europe.

History credits Hugh Sutherland (1843-1926), for promoting the building of a railway to Hudson Bay.  He came to Winnipeg in 1874 from Prince Edward Island, as an employee of the Public Works department of the Canadian Government. He began discussions straight away about building a railway northward to Hudson Bay. Government officials, and the public, thought the proposal was impractical. He struggled to convince others that his proposal had merit. After much argument and discussion, the government finally agreed with his idea. After his position with the Public Works ended, Sutherland remained in Winnipeg and became president of the Winnipeg and Hudson Bay Railway and Steamship Company, which became the Winnipeg Great Northern Railroad, and then the Canadian Northern Railway (CNoR). The company had a variety of names over its lifetime. 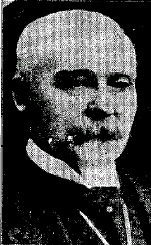 Survey parties went out in 1885 to map the best possible route to Hudson Bay and set out shortly thereafter to build the track. Construction went about in stages, especially as they waited the building of a bridge over the North Saskatchewan River. Then in 1918, the Canadian Northern Railway (CNoR) went bankrupt. The Canadian government purchased it to become part of the Canadian National Railway, and continued work on the northern line under that name.

On 29 March 1929, the Chief Engineer of the Canadian National Railway’s Western Region received a telegram that said: “Steel laid to Churchill today.” The first train to carry wheat on the new track reached Churchill in August 1931. The building of the northern railway had many setbacks, from political interference, financial difficulties, and engineering challenges. It was more than 50 years in the making. It reached Hudson Bay three years after Hugh Sutherland died.

The Manitoba Northern Railway incorporated in 1926. It branched off from the Hudson Bay Railway at Mile 7 to link to the community of Flin Flon, Manitoba. Large deposits of gold, silver, copper, and zinc were discovered in the region inspiring the Hudson Bay Mining and Smelting Company to establish a settlement there. The name of the town came from prospector, Tom Creighton, who found a novel in the nearby bush called, “The Sunless City.” The main character in the novel is Professor Josiah Fintabbatey Flonation who pilots a submarine through a bottomless lake. After he finds a hole lined with gold, he uncovers a whole new city. The 87-mile rail line was built through solid rock, muskeg, and clay in nine months reaching the mine by 1928 connecting the settlement of Flin Flon with the main rail line. 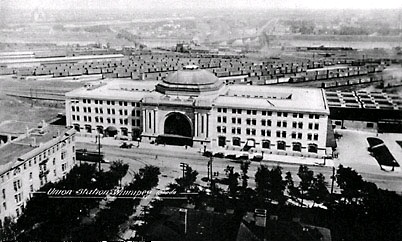 Union Station opened in 1911 at 123 Main Street, Winnipeg at the end of Broadway Avenue, with an official opening celebrated on 24 June 1912. It was a cooperative venture of three railway lines – Canadian Northern Railroad (CNoR), Grand Trunk Pacific Railway (GTPR), and National Transcontinental (NT). The Canadian Northern Railroad owned it with the other two railway lines being tenants. When the Canadian National Railway took over these railways in 1918, the building became a CNR building and home to its regional office.

An architectural firm from New York City called, Warren & Wetmore, designed the building. They were also responsible for designing Grand Central Station in New York City, USA. Beaux Arts is Union Station: Credit Heritage Winnipeg the architectural style of the building. Beaux Art expresses the academic neoclassical architectural style of Paris, France. The building is made of limestone construction with four stories. Its waiting room is finished in marble with arched skylights. The Manitoba Coat of Arms hangs on the wall in gold leaf. 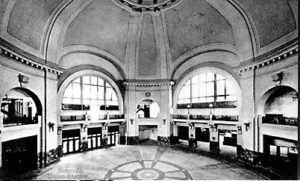 Its location at the end of Broadway Ave was actually the location of a bridge connecting Winnipeg and St. Boniface. In order to make room for the station, the bridge was dismantled. The decision upset many residents.

Today, Union Station is the only functioning passenger railway station left in Winnipeg.

The Canadian National Railway (CNR) became a railway in 1923.

There was once a Dance Hall at Grand Beach that was bigger than any dance hall in the country?

That trains used to carry people from Winnipeg to Grand Beach.

There were bathhouses at Grand Beach.  People used to rent bathing suits to swim in the lake.

There is a railway to Hudson Bay. Trains hauled grain from the prairies to the Bay where ships carried it to Europe.

The Children’s Museum at the Forks Market in Winnipeg was once an engine repair shop.

Beaux Arts – a form of architecture

CNR East Yards – Located at the Forks Market, Winnipeg.  This was where train locomotives and cars went for maintenance and repair.

Flin Flon – a mining town in northern Manitoba named after a character in a novel.

NPR – Northern Pacific Railway, an American railway that consolidated with the Manitoba Railway to built a branch from the United States to Manitoba.  The two lines joined at Emerson, Manitoba on the border of the two countries.

Union Station – Built in 1911 at the end of Broadway Avenue in Winnipeg. The only railway station still used in the city.

The Winnipeg Time Machine at: http://winnipegtimemachine.blogspot.com/2007/01/winnipegs-union-station.html

St. Boniface Museum, Saint-BonifaceManitoba: Exhibit on the history of the city of St. Boniface from its origins to 1914 (On National tour from 1991 to 1993)