With a rich and colorful history that reaches back thousands of years, Lockport is a settlement with scores of 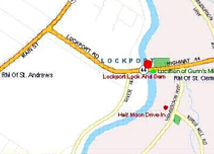 stories to tell. It was first inhabited by North American peoples because of the abundance of fish found in the murky depths of the meandering Red River. The longstanding tradition of fishing is still alive today with thousands of people per year visiting the dynamic community off highway #44, slightly north of the city of Winnipeg.

Centuries before the region received its name, Lockport’s earliest inhabitants lived in dwellings made from local materials. Cone shaped structures covered with animal hides and buffalo robes were built by some groups, while others built dome shaped dwellings using twigs, weaved grasses, and animal skins.

Seventeenth century oral stories maintain peoples of the Assiniboine, Cree, and Sioux Nations traveled to and resided in the area. By the eighteenth century written records tell us the Saulteaux/Anishinaabe/Ojibwa peoples arrived ~ one of those members was the legendary leader know today as, Peguis. During the later part of the eighteenth century First Nations groups began to mix with European male fur traders serving both the Hudson’s Bay and North West Companies, producing numerous offspring who also chose to remain in the area.

In 1812 the first group of Scottish settlers passed through the region of Lockport as they made their way south to the forks of the Red and Assiniboine Rivers. Then several English, Scottish, and Orcadian Hudson’s Bay Company retirees and their Native American families migrated to the area to take up permanent residency with their newly obtained land grants from the Hudson’s Bay Company. These families cut trees along the riverbanks and dug limestone from the riverbed to build their houses.

Soon a small school and library emerged in the home of Margaret (Swain) & Donald Gunn, a retired Hudson’s Bay Company family. As the community grew neighbors erected fences and barns for their livestock, and a local blacksmith shop emerged. The settlers cut hay in the marshes, and cultivated land for grain and vegetables. Several water and wind powered grist mills arose throughout the community. Social events were frequent and always held at someone’s house. St. Andrew’s Church, ministered by Rev. William Cockran and his wife Anne, was the closest place of worship.

As early as 1829 the area was referred to as Little Britain, and by 1852 the name Little Britain was officially used. As the community grew, plans got underway for a community church. The stunning stone edifice named Little Britain United Church arose in 1874.

Before the introduction of the paddleboats and steamships to Red River, the only types of boats to follow the 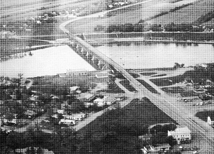 meandering waterway were canoes and York boats ~ vessels that could be physically maneuvered over or around the rapids at St. Andrews south of Lockport. However, by the mid 1870s, the main mode of transportation had changed to bigger vessels. Unfortunately, these larger vessels were unable to traverse the rapids, preventing them from traveling between the forks and Lake Winnipeg. Therefore design and construction on a lock and dam, referred to as a Camere system began around 1900. The locks took almost 10 years to build, being declared officially open in July 1910 by Prime Minister Sir Wilfred Laurier. The new lock and dam controlled the water flow of the Red River, raising the water level at the rapids thereby permitting boat traffic to pass through. With the creation of the lock and dam, came the named Lockport

As the crew excavated the waterbed in preparation for the foundation of the lock, they unearthed an amazing amount of mud. That earth was placed slightly south of the locks, which today makes up the small island that each year becomes a temporary haven for thousands of migrating geese. A spur line was built from the town of Selkirk to the work site, enabling the men to get machinery and material to the site. After the lock and dam was completed the spur line was removed. 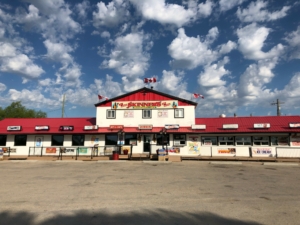 With the completion of the lock and dam came a considerable increase in both visitors and residents to the area. Several businesses sprouted up. The Lockport Flour Mill Company started operations in 1917. In that same year a bus service called Bushman & Boatman serviced the community when Canada’s first woman bus driver, Mabel Davis Richmond, chauffeured locals around in her Ford Model T bus. During 1919 she drove folk between Lockport and Winnipeg. The area also had one or two restaurants to feed hungry crews working on the construction of the lock and dam. In 1926, proprietor Mary Gunn sold a full steak dinner for 25 cents. Soon after, hotels with drinking parlors and room rentals became part of the landscape at Lockport. 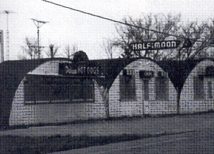 In 1929, Lockport became home to the famous Skinner’s restaurant as the Skinner family began selling a new tasty treat called the hotdog. People came from miles away to try the mouth-watering sensations for a mere 10-cents. Competition followed with the Half Moon hot dog and chip shop in 1940.

In 1958, in an attempt to reduce the floodwaters from entering the city of Winnipeg, the Dufferin Roblin Administration decided to create the Red River (or Winnipeg) Floodway. The 30 miles stretch of channel often referred to as “Duff’s Ditch”, travels north to discharge back into Red River below the dam at Lockport. 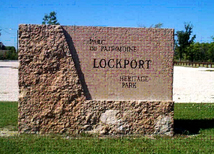 Today Lockport is home to many families, several restaurants, retail outlets, two churches, one school, a provincial park, and a museum with the Cree name Kenosewun, which means, “There are many fishes.”