The Selkirk Wildlife Association was first organized in 1942-43. Some members of the first executive were, Ben Funk; President, Dr. Wittiker, Dr. Robinson, Doug Pruden, Frank Newman, Arry Verhuel, and Casey Van Hartevelt, who assisted in respective positions. They received guidance from the parent body “The Manitoba Wildlife Federation”, and supported functions in return.

The Selkirk Wildlife Association has always been blessed with a strong membership, who believe in good sportsmanship and conservation. In following years different persons were elected to the executive, who devotedly worked towards promotion of the Clubs constitutional by-laws. It is impossible to list the names of all who have left memorable contributions to the club. However, to all who have served on executive positions, as well as members, I wish to express “Thanks” for your contribution. 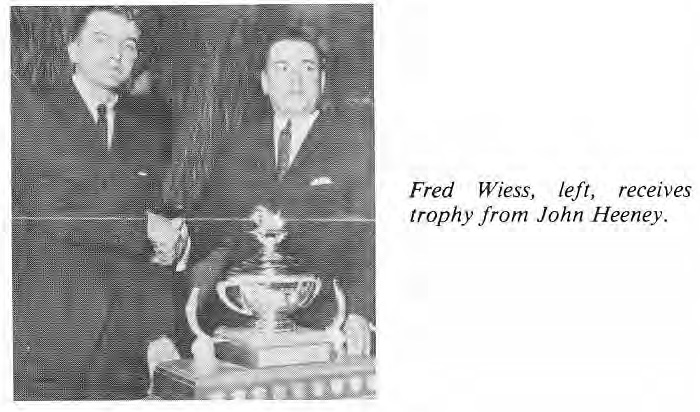 ln 1966, property was bought from Anthony Chorney as East Selkirk on which to build a new clubhouse and a good safe shooting range. this is our present rifle range and clubhouse located l/2 mile east of the Anthony Chorrey corner on Highway No. 59.

The 1966 Executive received a Charter from the provincial secretary for the organization to be recognized as “Selkirk wildlife Association. ” 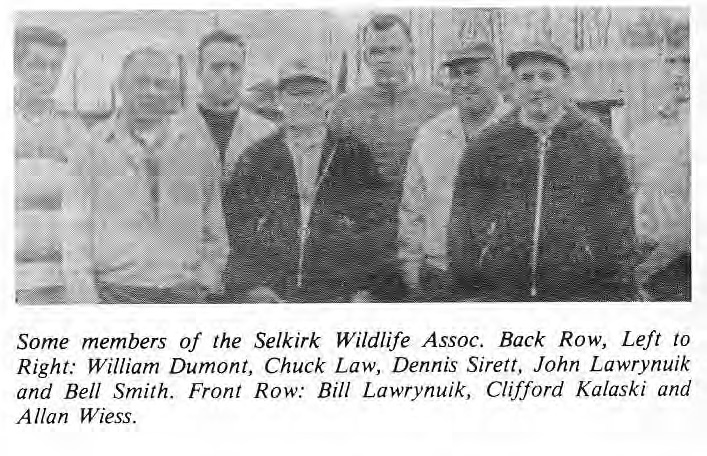 Due to the efforts of Membership Chairman, Ed Corby, the Selkirk Wildlife Association has received many awards from the Manitoba Federation and Game and Fish Assn. for record membership, many consecutive years. The Manitoba Wildlife Federation has presented many diplomas for highest provincial membership in one club. A Centennial Award was received in 1967, in Manitoba’s centennial year, also in 1963 the club won the Carling Conservation Trophy.

The highlight of the Clubs events is the Annual Deer Head Banquet, where awards, trophies and prizes are presented for competitive club events throughout the year. These supper and dance banquets are usually a sellout as with membership in the 700 and over range, tickets must be purchased early.

Recently, the Wildlife Society used our banquet to present their annual award to Tom Schindler, of Clandeboye, whom they felt deserved the award due to his contribution to Conservation.

Selkirk Wildlife Assn. assists annually, the Wild Gobblers Unlimited. They also released some wild turkeys at the range. They have supported hay feeding programs for deer in heavy snow winters, and they made nesting boxes for ducks in the Selkirk Park.

The Selkirk Wildlife Assn. “rifle range” is also a qualified handgun range. Practice shooting by members as well as competitive organized shoots are held. Only members are allowed to participate.

I believe our running deer target is the first moving target as a rifle range in Manitoba. Trap shooting goes from the end of Aug. to early Oct. When the competition shoot is held. 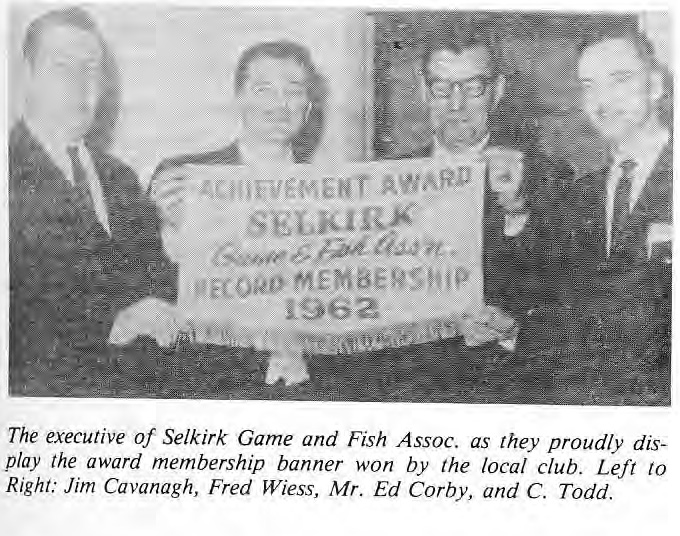 The range has ten rifles Bench rests, under roof, for sanctioned events or member use. In some of the mentioned events we’ve hosted competitive shooters from all parts of Canada and various U.S. points.

There has always been good public relations between Selkirk Wildlife Assn. and the local RCMP with assistance whenever needed.

Fishing is another sport that involves a large part of the membership. The Fishing chairman hosts an annual fishing derby for members, a senior and junior fishing derby, an open fall fishing derby, and has been involved with the Manitoba Handicapped fishing derby, supplying boat and attendants. Here, prizes and trophies are also awarded.

The Fishing Chairman has also registered membership with Old Killer, Gold Badge Award Competition sponsored by Chas. Fidler and Son Ltd. of Selkirk in Cooperation with the Manitoba wildlife Federation.