On Jan. 14, 1957, posters were made and distributed throughout Grand Marais and surrounding districts. This poster announced an important meeting to be held Jan. 20, 1957 , in the Social Hall in Grand Marais. The object of this meeting was the forming of a curling rink in Grand Marais. 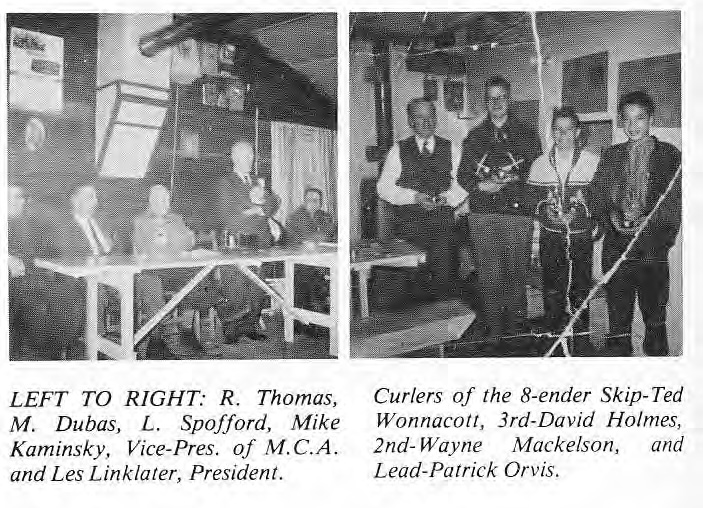 A large number of people being present in the hall Jan. 20, the meeting was declared open. Mr. George Richardson was asked to act as Chairman and David Barteau, as Secretary. At the request of the chairman, Mr. Frank Rogoski explained the reason of the meeting. He mentioned that the meeting was held to elect an executive chosen from all the districts. This executive body was to work in close harmony to raise sufficient funds to purchase building material and erect a curling rink with two sheets of ice. Mr. Richardson, the chairman, proceeded to the election of officers of the club, and a group of men to form the executive.

Vice-President: Anne Lester of Victoria Beach nominated Mr. W. Whyte. There being no further nominations, Mr. Whyte was elected as Vice-President, Secretary: Mr. F. Lupkowski nominated Mr. D. Barteau. No one else wanted the job, so Mr. Barteau was compelled to accept the position.

Treasurer: Harry Blake Knox nominated Mr. E. Mallard. and no further nominations were made, so Mr. E. Mallard was declared the club Treasurer.

The first meeting of the Curling Club executive was held Monday, Jan. 28, 1951, in the Grand Marais School. Walter Whyte acted as speaker of the Victoria Beach delegation. He told the meeting that the feeling in Victoria Beach was that it was felt that a rink could be built in Victoria Beach by the residents of that place. Since it would be impossible to aid in the building of the rink in Grand Marais, Mr. Whyte and the other members of the executive from Victoria Beach resigned. Walter Whyte resigned as Vice-President, nominations were held and Les Linklater was declared Vice-President. Bingo’s, dances and raffles were held to raise funds for building the rink. Various sites were discussed where a rink could be built. It was decided that the Secretary write a letter to the Sec. Treas. of the Municipality regarding land near the school for a community playground, and that Henry Recksiedler, Alex McKenzie, and Frank Rogoski attend council meeting to be held on March 12, 1957. This committee was to report back to the monthly meeting on March 18, 1957. The R.M. of St. Clements gave 4 acres 0f land east of the old school to be used indefinitely for Incretion. The old Curling Rink in Beausejour was up for sale, so the committee went in from Grand Marais to see it. A tender was put in and they got the rink. It was moved in three pieces after May 6, when they were given permission to move the building. The foundation was prepared and the building was moved on, the work being done by volunteers. They were able to buy curling rocks from the Whitemouth Curling Club for $350.00. The official opening of the club was held Dec. 15, 1957. The ladies served lunch to the guests and friends and a great time was had by all.

Mr. Phil Gentes was the first caretaker and icemaker. he was paid $75.00 a month, besides the nightly curling, he also looked after bonspiels.

The First bonspiel was held on Dec. 20, 21, 22, 1957 . Some of us didn’t know heads or tails of the game, but soon we learned what an in turn and an out turn meant. March 30, 1957, an Inspector of Health made an inspection and stated that it was necessary to have inside toilets in the curling rink. On Jan. 17, 1962, we had quite a thrilling night, an eight ender in the club. Skip Ted Wonnacott, Third David Holmer, Second Wayne Mackelson, Lead, Patrick Orvis.

In 1969, the Grand Marais School was vacated, we asked for permission to use the School for a Hall and we got it. On Nov. 6, 1970, the Grand Beach Curling Club became incorporated and the club became known as the Grand Marais Recreational Centre, we continued using the old Curling Rink until the winter of 1973. ln August of 1981, a fire destroyed much of the Hall, but with the great work of our volunteer Fire Dept., all was not lost. A new one has been erected, which is just grand and it is one to be proud of.