It was on January 9, 1918 that the Reverend Ivan Kussy called a general meeting within the Poplar Park district to discuss the building of a Community Hall. The meeting was held at the home of KIym Weremy and Rev. Ivan Kussy chaired, while Mike Marko acted as the Secretary. to a lengthy speech the Rev. lvan Kussy outlined the need of such a community institution and the benefits it would provide. After much discussion those in attendance all agreed the need was there.

The next order of business was to strike up a membership and 75 members signed at the very first meeting. Next on the agenda was the election of the Board and Executive. Elected to the first Board were the following seven members who filled the positions as outlined:

After the election of the Board, membership fees were discussed in order to provide the newly formed community association with funding. It was decided that membership fees be paid monthly and that the rate be struck at 15 cents per month for the adults while children be charged only 5 cents per month. It was at this point that Mr. Klym Weremy very kindly offered to allow the free use of his house for meetings until such time as the organization could build its own home.

As time passed, the newly formed organization continued to meet at Mr. Weremy’s house and soon the item of discussion was to acquire some land as a site for the building of a permanent Hall. Then Metro Hinkewich and Michael Marko approached Mr. Klym Weremy to sell the organization one acre of land adjoining the church site. Mr. Klym Weremy with some reluctance agreed to sell one acre for the sum of $ 10.00. 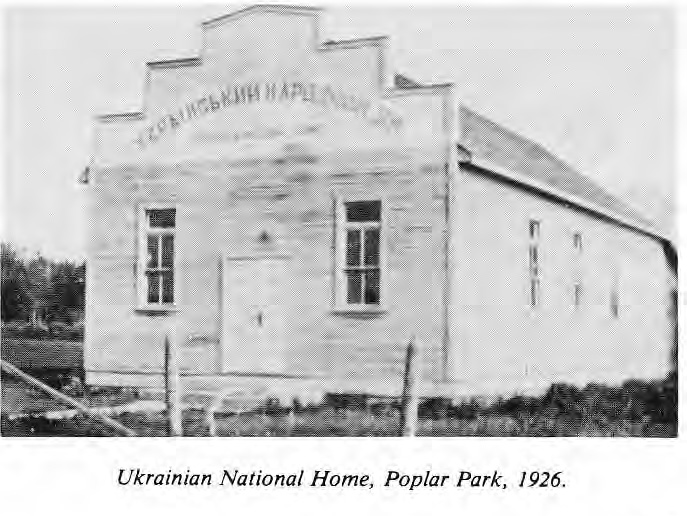 The next order of business was to choose a building committee and they soon elected five men to be in charge of constructing the building in the name of Michael Markervich, Michael Fill, Michael Sitar, Gregory Lysaichuk and Dmytro Cherneskie.

It was decided to construct a lumber building measuring 52 feet in length, 2,1 feet wide with 12 foot walls. Each member agreed to donate tree labour as was needed. Michael Marko was appointed to be in full charge of the project and responsible for ordering all the required materials as well as keeping an accurate record of all expenditures.

Hooker Lumber Company, situated in the Town of Selkirk quoted the sum of $750.00 for the lumber and material. The members agreed, ii called upon, that they would drive by team of horses to Selkirk to haul the lumber to the. job site. The committee was very grateful to learn that Aibert Starin would be donating all the gravel required for the foundation, free, from his gravel pi1. Next, it was agreed that they needed a carpenter and this task was accomplished with the hiring of Mr. Riehl at the rate of $4.50 per day.

This building was erected in record time and by l923 was found to be of a size inadequate to meet the needs of the then active membership. During a special meeting of the membership on Feb. 25, 1923, it was decided to build an extension from the back of the existing building. The extension was 1o be 2,1 feet in length while the width was specified as 16 feet. The extension walls were to be outside ship lap, tar paper and finally siding. Mr.’ Albert Starin agreed to supply the gravel for cement purposes at 50 cents per yard. The resolution allowing for the building of an extension to the existing building was carried unanimously.

The community enjoyed the added space and made good use of the facility for numerous activities. Finally, in 1927 another special meeting was called in September to discuss the painting of the outside of the building. After a lengthy discussion and many suggestive colors, it was decided to buy the paint and tender the work. The color finally decided upon was yellow. When the resolution was carried, it also stipulated that each member would contribute $2.00 towards the cost of same.

This spirit of total cooperation and commitment by the community’ members has continued throughout the history of the Poplar Park Hall.

A word about taxation over the years. The financial records show that the Hall paid Municipal Taxes starting in 1921 and continued to do so up until October l941 lt was in the year 1935 that the Council of the R.M. of St. Clements by resolution placed all Halls it the municipality at a flat tax rate of $20.00 per year. Finally’, in 1941 as covered in the Munc. Act, all community halls built on less than 5 acres of land could be exempt entirely from taxation. Because there were now, by the 1940’s, more halls in the municipality, the Municipality of St. Clements by resolution exempted the Poplar Park Hall from any further taxation. This action of Council was brought about by a strong appeal from the resident ratepayers of the various communities where halls were located.

The Poplar Park Community Hall was (and most decidedly still is) a great asset to the district. Over the years, in terms of education, the hall played a positive role. Each month the committee provided a forum for theatrical plays and drama. These productions were in Ukrainian and those who took part were our young people. Although none of them ever made Hollywood, they certainly earned themselves great respect within the community and learned a lot toward being good Canadian citizens. The Hall also provided a good Ukrainian Library selection and members donated much reading material and loaned them out. Also, the Christmas concerts put o[ by the schools were held in the Hall at all times, as the Hall had built a beautiful stage with a canvas curtain and on that curtain was a Ukrainian Village painted by an artist by the name of Holubowjch. The records show that Mr. Holubowich painted the backdrop scenery for a fee of $230.00 for the work.

As to rentals of the Hall, a member had the privilege renting the premises for weddings and other occasions at $10.00, while political meetings netted $5.00 per use. The church, of course, could use the hall or meet at no charge.

The records also show that from time to time the Hall made small donations to various organizations such as the Red Cross etc.

Over the years the Poplar Park Hall had very close ties with the East Selkirk Hall, both being built at about the same time. On many occasions they would exchange their theatrical plays, costumes and cultural events.

In the spring of 1960, disaster struck the Poplar Park Hall. During spring clean up, some members were burning grass on the hall site and it caught fire and burnt to the ground. The incident caused a sadness in the community and the hall was sorely missed by old and young alike. Meetings were held to discuss the disaster, but it wasn’t until April 30, l96l that a formal meeting of members of the Ukrainian National Home of Poplar Park was held to discuss the possibility of building a new hall. This meeting was called by President Jack Gloss and was held at the home of Harry Sawula. At this meeting there was a Committee of four members elected to explore the ways and means of building another hall and they were to report back to the members. The four elected were: Steve Myslarvchuk, Dmytro Marko, Michael Kossack, Harry Sawula.

By June 5, 1961, another special meeting was called at the home of Harry Sawula to hear the report of the building committee. Their recommendation was to build a new hall on the same site as the old one, and it should Be a structure measuring 80 ft. by 40 ft.

Selkirk Lumber had been contacted and they had quoted $15,780.00 for a hall 80×40 lt. with l2 ft. walls, built out of cinder blocks and included all material and labour.

Contractor, John Leshok from Ladywood quoted$15,730.00 for a building, 80×40 ft. with l0 ft. walls, cinder blocks including material and labour. 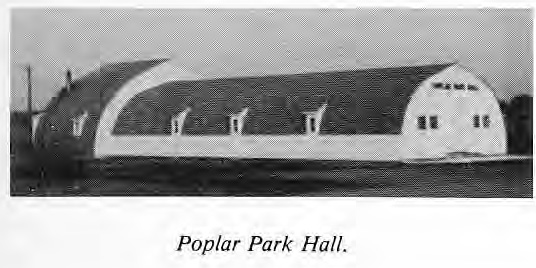 Steinbach Lumber quoted $16,000. for the same size building but built out of lumber and of a Quonset type and the height inside would be 26 ft. high. The shell included material and labour and also included the furnace. The members accepted the bid of Steinbach Lumber.

With the fire insurance money, plus a loan from the Selkirk Bank of Montreal for $6,000.00 at 6% interest, the Poplar Park Hall membership commenced once again building a community hall. The first gathering in the new Poplar Park Hall was held on December 31, 1961, a New Year’s Party that was a huge success. The “Grand Opening” was proudly held on May 10, 1962.

Since that time, the Hall has been constantly in use for weddings, banquets, socials, meetings, and many other functions to fill the need of the community at large.

Researched and submitted by Steve Myslawchuk