The Ukrainian Youth Club of East Selkirk was organized in 1936 with an initial enrollment of some 13 members. The membership fee for joining was struck at 10 cents per month, per member. By 1937, this enrollment had increased to about 27 young people. The organization was very active and the membership were involved with teas, concerts, and dances which were held every Sunday. It was in the year 1937 that a church choir was organized under the able direction of Mr. William Dubowitz. The Club formed sports leagues and engaged in baseball in summer, and skating in winter. The members chose a committee to attend the Congress in Winnipeg, as well as, subscribed to the Catholic newspaper and bulletins. These newsletters were distributed amongst the members so that all had an opportunity to view what was being done across the country as a whole.

In 1938, the club branched out into the competitive enterprise system by leasing a corner Confectionery Store (the site of the present Ukrainian Catholic Church) in order to raise funds for the club. This was also the year that the Club hired a Bus to take them to Camp Morton, where they attended the Roman Catholic Summer Camp. That same year they took a trip to Sandy Point Waller another outing was enjoyed.

The Dances continued to be held regularly, along with a few concerts and in 1936, they held their first Fall Bazaar.

In 1939 and 1940 they continued on with their summer and winter sports, picnics, concerts, teas and regular weekly dances. ln March 1940, they brought in a guest speaker, John Nowosad of Wpg., and later on that summer donated the expenses and supplied the volunteer labor needed to paint the belfry of the Church. The year 1940 also marked the first year that the club organized a community Whist Drive and their first Bingo was held in Sept. Both were termed a great success. 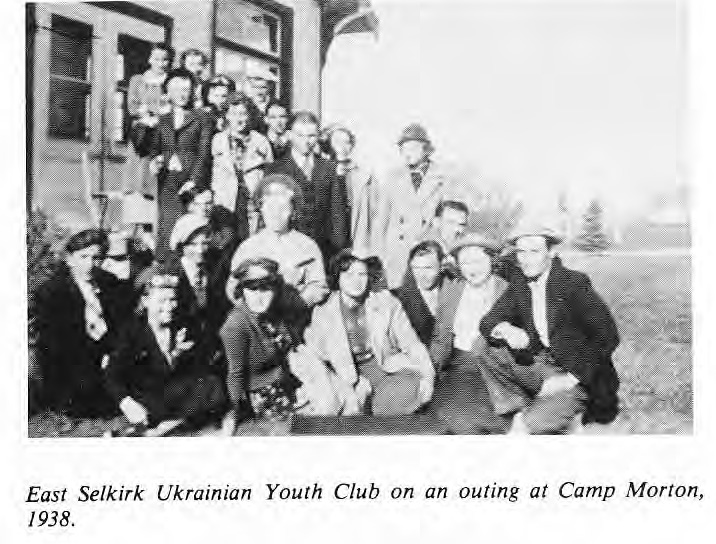 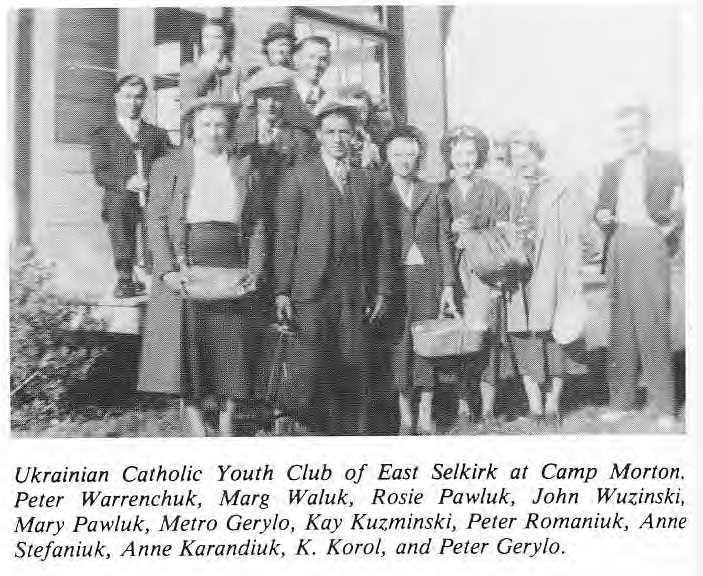 It is interesting to note that at first, the teas were held in all the homes around East Selkirk and district, on a rotational basis with each member taking their turn at hosting them. The whole family would join in and there were games for the young ones and always good food to go with the tea and social activities. After a few years, the attendance at these teas held in the homes finally outgrew the space available and the Youth Club got permission to have the event held at the East Selkirk Hall.

During World War II, the weekly dances were not as frequent or as well attended as in the past, but several teas and dances were still held. The Club continued to sponsor their delegates to attend Congress, usually always held in Winnipeg.

ln 1942. the enrollment in the Club was about 40 and it became a fairly active year. This was the year that the Club sponsored four of its members to attend Leadership Courses held in Arborg and Starbuck, as well as, receive training in Folk Dancing. As a result, the meetings really perked up and new games and different folk dancing classes were held weekly. Because it was the war years, it was decided to have First Aid taught to all the members Mary Karpetz fulfilled this duty for the Club, in a most able and efficient manner. 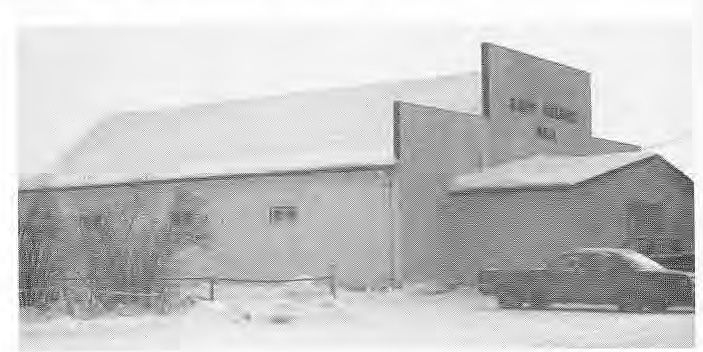 A Giant Rally was held whereby each and every Ukrainian Catholic Church attended. It was held in Winnipeg and deemed a huge success by those attending from here. In the years 1943 to 1945, the enrollment climbed higher but activities during much of the period were rather quiet. There was much Red Cross work. Parcels were sent to soldiers overseas and fruit baskets were prepared for those confined in Deer Lodge Hospital. By this time, many of the members were serving in the Armed Forces, and the club experienced all the fears and anxieties that most clubs felt, waiting daily for news from their loved ones. The Club authorized and had made up, a framed Scroll of Honour listing all the men from the Ukrainian Catholic Youth Club who had enlisted in the Second World War. This honour roll was placed in the East Selkirk Hall and is still displayed there up to the present time.

The concerts and plays of the Youth Club continued on at the East Selkirk Hall and on occasion they were performed in other districts such as Tyndall or Lady wood, etc. The weekly dances and whist drives were still looked forward to by the membership and others. 1946 was still a very active year, and the membership had increased even greater, as all the boys were now home from the war. However, this is where the record book ceases.

Many of the members as they reached adulthood became active members of the East Selkirk Hall Committee. They had certainly gained valuable experience during their Youth Club years. The concerts and plays and the many enjoyable outings, as well as, the practical instruction they received along with the companionship is now often fondly recalled. Their one attempt at running a store back in 1983, could be termed their only real failure, but a valuable lesson was perhaps learned.

The club was active from its inception in 1936 to the year 1946, a period of ten years, winding down once the Second World War was over. lt met weekly for clean, wholesome. activities and served a real need in the East Selkirk area. The Club not only entertained its youth, but instructed them in sports, recreation, cultural and humanitarian efforts. Many of their members served in the armed forces during the war, and one paid the supreme sacrifice.