The Ukrainian Benevolent Society of East Selkirk was incorporated by April 1, 1928 and continued as an active organization till the end of 1949, and beyond that time less actively.

The Society not only paid partial medical expenses, but also served as a social and fraternal organization by hosting such events as tea parties, concerts and picnics, by the Red River for its membership.

Meetings were held at the East Selkirk Hall on Sundays.

This group were instrumental in aiding many members of the community who were in need of assistance.

The membership fee was minimal and at one time they had about 60 members belonging to this society created for the benefits of the people of the community.

The cash book and annual report are both written in the Ukrainian language and in the possession of Mary Harluck.

We salute this group who worked very hard and diligently within the community, especially during the depression years, they are to be commended for their untiring efforts.

In looking through the Record Book, these would appear to be a list of all the members: 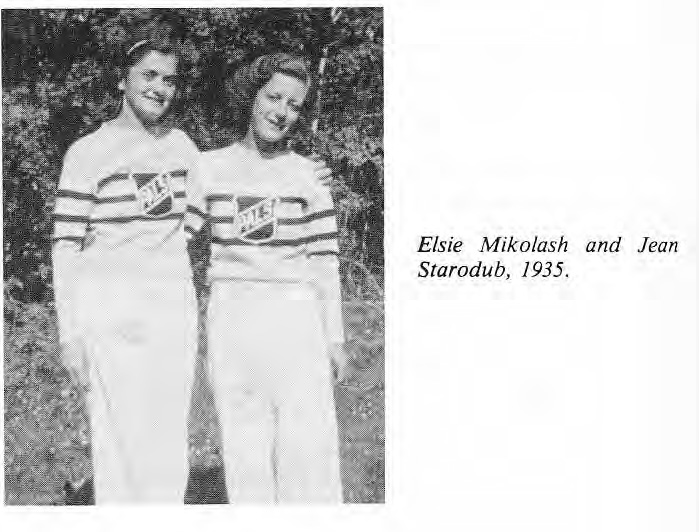 Meetings were held weekly in the homes of members. Forty years later, a reunion was held at home of Olive McLean.).Wardrop.
The Pal’s Club was not only a social club, but was very community minded. Dances, teas, etc. were held, and the monies collected were donated to the Red Cross, Selkirk General Hospital, I.O.D.E. and a benefit dance was held for a bereaved family.

It is interesting to note that admission to the dances was l5 cents for ladies and 20 cents for men. with a lunch served at midnight.

Each dance had a master of ceremonies, and some of these were: Jimmy Allan, Tom Allan, Bill Kolodie, and Mike Korba. Among the various bands that played at these dances were: The Fifty Fingers, Andy Desjarlais, Ben Rood and His Red River Ramblers, Sunny Boys, Melancholy Bachelors and Del Genthon, all from Winnipeg. Willard Gibbs, of Selkirk, Bing’s Melody Boys, Lockport and our own, Sailors from East Selkirk.

The club’s weekly meetings were always opened with the song “Manitoba”. The members purchased white and black sweaters with the Pal’s crest. A monthly bulletin, called the Pal’s Chatter was printed for the members. On two separate occasions the Pals holidayed at Hoban’s Park in Beausejour and at Grand Beach.

Do any of you remember “Love Eagle” and “Sleepy Hollow”?