Thomas Bunn (Jr.), the son of Thomas Bunn Sr. (1830 to 1875) and Rachel Bunn (Harriott) was born in the Municipality of St. Clements in 1874.  His father was the same Thomas Bunn who was a member of the Council of Assiniboia as well as the Provisional Government of Louis Riel and the first Manitoba Legislature in 1870. 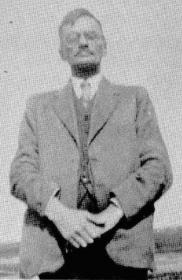 Our Tom Bunn was the grandson of the late Dr. John Bunn, the first Canadian-born doctor to locate at Red River.

Tom’s mother, Rachel Bunn was the daughter of John E. Harriott.  The Harriott family had come from England in 1790.  Her father had come from Montreal and became chief Factor for the Hudson Bay Company, stationed at Edmonton.  Rachel Harriott was born on June 4, 1840 at Rocky Mountain House.

Rachel married Thomas Bunn on March 31, 1859 and spent the earlier years of her marriage in the St. Paul area, moving to St. Clements in about 1863, where she remained most all of her days without interruption.  She was a devoted Church worker, attending and supporting the St. Clements Church.  Rachel died on March 31, 1909 at the home of her son, Tom Bunn, and was buried in the Churchyard of St. Clements at Mapleton. Tom was born in St. Clements in 1874 and received all of his education in Manitoba.

On Tuesday, February 22, 1898 he married Frances Jane Hodgson the daughter of Edwin and Mary Jane Hodgson, also of St. Clements.

Tom and his wife Frances Jane had several children with Gerald being their first born in 1899.  Gerald was never a very robust child and very sadly died August 15, 1916 in his 7th year. In 1902, Isabella Adelaide was born and died at the tender age of 1 year (on December 30, 1903).  Three other children were born: Maurice, Edward, and one daughter (Mrs. C. Walterson, of Selkirk).

Tom also farmed and in 1910 it is reported that during threshing on the Bunn property in St. Clements he averaged between 24-25 bushels an acre of wheat.  That year he also picked about 1000 bushels of potatoes. The year 1910 was a very dry year but crops turned out better than expected.

In the fall of the year 1914 Thomas Bunn moved over to the town of Selkirk and took up abode on the Gemmel property on Eveline Street, South.  Mr. F. Reid, who had been formerly connected with the Red Feather Farm, leased the Bunn property on the east side of the river and planned going into poultry and market farming at that location.

Thomas William George Bunn died in the early 1940’s and lays at rest in the St. Clements Churchyard Cemetery.

Life in the Community

Tom very early on showed tremendous interest in the Municipality of St. Clements and the surrounding districts and contributed greatly toward its development. He was Councilor and Secretary Treasurer of the Municipality for nearly 40 years and served as Secretary of the Kitchener School for about 44 years.  He was a Mason and served as the Secretary-Treasurer of the Lisgar Lodge for over a quarter of a century as well as Past Master.

In 1899 he was nominated as Councilor of St. Clements Municipality representing the electors in Ward 3.  He held this post until October 29, 1906 when he resigned as Councilor and became Secretary Treasurer, replacing W.R. Young.

Thomas Bunn was very involved with the Selkirk Board of Trade from its inception and usually attended all meetings regularly and often filled committee posts representing the east side.  During the First World War, he headed various district campaigns for Victory Bond drives and was instrumental in the success of the Selkirk Home Economics Society and Red Cross Work within the province.  He was appointed Returning Officer for numerous provincial and federal elections as well as local campaigns.  Earlier in his career he represented St. Clements on the Millions for Manitoba” committee and promoted the east side and district for settlement.

Tom was a devout Anglican and served his local Mapleton (St. Clements) Church as well as Christ Church in Selkirk as Minister’ Warden in both Churches.