Thomas Bunn was one of the early pioneers of St. Clements who devoted much of his life to shaping the development of this part of the Red River Settlement.  The son of a noted leader of Red River Colony, Dr John Bunn, he was a farmer by occupation and in later years turned his attention to the political development of the colony. 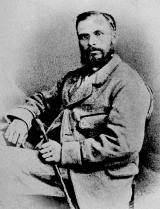 He was a representative on Louis Riel’s first Provisional Government and then on the first legislative assembly for Manitoba.  The stone house he built as his home in 1862 still stands on the banks of the Red River across from St. Clements Church at Mapleton.

Thomas Bunn was born on May 16, 1830, the son of Dr. John Bunn and was named after his grandfather who had come to Rupertsland with the Hudson’s Bay Company in 1797 from England.

Dr. John Bunn was a very interesting individual, unique in many ways, as he was sent back to England to Medical School and then returned to Red River to be the local practitioner. He later came to be a prominent political figure as Magistrate and Recorder for the settlement. He had two sons, Thomas and John.

Thomas and Rachel spent the earlier years of their marriage in the St. Paul area, later moving to Kildonan, then to St. Clements in about 1863, where they remained most all of their remaining days.  Rachel was a devoted church worker, attending and supporting the St. Clements Church.  Rachel died on March 31, 1909 at the home of her son, Tom Bunn, and was buried in the Churchyard of St. Clements at Mapleton.

Thomas has been described as a farmer who originally farmed in the Kildonan area. During one of the big floods in Kildonan 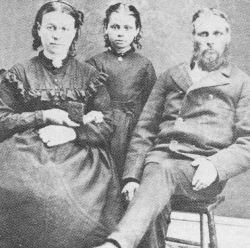 when they had to move to Birds Hill, he promised Rachel that he would build her a house at a location where she would never have to worry about floods.The house he built for her in 1862 still stands 70 feet above the Red and far above any flood waters ever recorded, at Lot 97 in the Parish of St. Clements on the east side of the Red River.

Wheat and some cattle were the primary produce raised on this farm. Hay was harvested from open meadows except in some of the dry years like 1864 when the only hay available had to be made at the Netley Marsh.

Thomas  and Rachel Bunn had several children, the most notable one was  son Thomas who also was very involved in the political life of the community serving as Councilor for Ward 3 of the St. Clements Municipality from 1899-1906 and then as Secretary-Treasurer from 1906-1940. 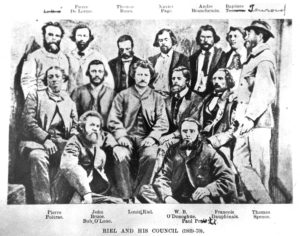 Thomas Bunn was very active in the political life of the community. As his grandmother was of native descent he had sympathy for the treatment other Métis were receiving from Dominion Government surveyors. When Louis Riel declared the Provisional Government of Assiniboia, Thomas Bunn was elected in November 1869 as the English speaking member for the parish of St. Clements and served as Secretary of State.

When representatives of this government went to negotiate with Ottawa, their commissions were signed by “Thomas Bunn, in the name of the President of the Provisional Government of Assiniboia in Council, a Seat of Government, Winnipeg Assiniboia”. In 1870, with the establishment of the first Provisional Legislative Assembly, Thomas Bunn was elected to represent the constituency of St. Clements and did so until he died on April 11, 1875.

From accounts, some of those early political meetings did have some excitement as reported in the Manitoba Newsletter of Wednesday, February 8, 1871. “Accident at a political meeting held at the house of Mr. Thomas Bunn, Mapleton, on Wednesday last, Mr. Wm. Calder met with serious accident. Pushed over the back of a chair, he had two ribs hurt and was otherwise seriously injured.” In June 1871 he was called to the Manitoba Bar and served in the judiciary until his death. 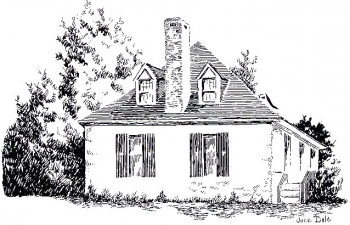 This stone house located on the banks of the Red River, stands today as a testimony to the builder Samuel Taylor, the same mason who also built the St. Clements Church at Mapleton.

The house, which was named Victoria Cottage after the reigning monarch, is described often in the diary of Samuel Taylor, a document which provides insight into the daily life of the settlement.

June 1862 – I began to build Mr. T. Bunn’s stone house on Monday,June 23. Very hot dry weather.I built there the whole week. Very hot every day. Mr. Bunn helped me to build and will soon be a good mason.
May 1863 – I began to square corners and lintels for Mr. T. Bunn’s house on Tuesday, 19th.
September 1863 – I finished building Mr. T. Bunn’s house upon Friday 18th a fine day.
August 1864 – I am plastering Mr. Bunn’s stone house yet.I am alone this long time. I began to build Mr. T. Bunn’s chimney tops on Friday 26th, a windy day.I finished the first chimney Monday 29th, and then I began the other chimney top.
October 1864 – We put up the ceiling in Mr. Bunn’s parlor on the 21st, fine almost calm day.We were painting Mr. Bunn’s fine new parlor on the 22nd, a pretty day.

The house measured 40 x 28 feet; the stonewalls 3 feet thick were set 6 feet into the ground to hardpan. The rod supports were made of squared timbers fastened at the peak with wooden dowels and the eve ends anchored in the top of the stone wall. There were 3 rooms on the main floor and 4 rooms upstairs. 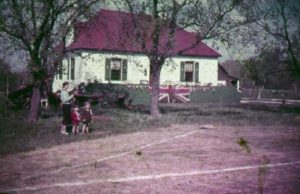 and passed in front of the house down to the ferry which crossed over to St Clements church and to Selkirk. This ferry was in operation until the lift bridge was opened at Selkirk in 1937.

Thomas Bunn (Jr.) lived in the stone house for a number of years after his father’s death, but in 1920 he built a new house on Britannia Avenue in Selkirk. After that a succession of families rented the house including some of the new arrivals from overseas.  Mitchell Van Hartevelt recounted the time he spent living in the stone house before his parents built their new house next door on Lot 98.

In 1936, the house was sold to George Montague, a Winnipeg businessman who recognized the historical value of the house and spent considerable effort in renovation, installing modern conveniences yet retaining the historical nature of the house. The fact that the house exists today in excellent condition is a tribute to the foresight of this individual.

In 1944, the house was purchase by Dr. C.B. Stewart of Winnipeg who with his family initially used the property as a summer 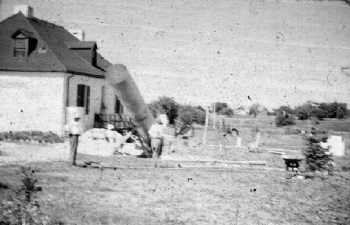 residence. Since then, with additional improvements of facilities and with the addition of a purebred Polled Hereford herd of beef cattle the family operated a full scale farm, Victoria Dale Farm. The farm operations are currently on a reduced scale.

The site is currently owned by the two families of sons; Burton & Fraser Stewart. Their intent is to maintain the historical nature of the house as a tribute to our early pioneers Thomas Bunn and Samuel Taylor.