Ken Cybulsky owns and operates the largest single strawberry operation within the province of Manitoba. It is situated in a park like setting along the east bank of the historic Red River covering ll0 acres of Lots 99 to 104 within the Parish fl St. Clements. better known as Henderson Highway North (Kitchener area). 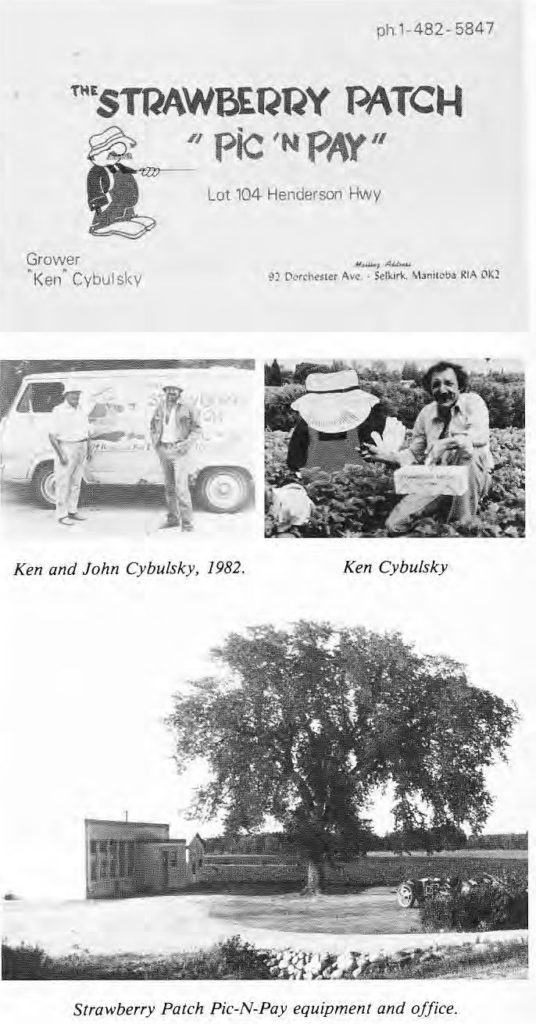 The commercial operation really commenced in 1978 when Ken started out with an initial 5 acre plot transplanted into strawberries. He expanded into eleven acres by 1979 and the next year increased his acreage to 17. By1981 the need was there for an additional 9 acres and 1982 saw 44 acres in operation. The year 1983 saw the greatest expansion to date, when over 70 acres was in production. Added to this was 3 acres of raspberries in 1981 which Ken extended to l0 acres by 1983.

This growth and expansion has given Ken the distinction of being the largest single strawberry grower in the province at the present time.

The certified plants that are used on the Plantation are from Nova Scotia and produce a very sweet berry that is winter hardy (which we have need of in Manitoba due to our harsh winters). Ken uses the 3 year growth cycle pattern which assures new plants, on a rotational basis, with each year. The “Red Coat” is followed by “Bounty” and later by the variety “Kent” which creates the continuous picking season almost without interruption. The l0 acres of Raspberries are of “Boyne” variety which is a hardy cane of sweet berries of good yield.

The “Strawberry patch” can employ up to about 30 people during their peak season, and local help from within our own planning district is given first choice.

The operation is fully irrigated using water from the Red. River. pressured from two pumps having a capacity  of I400 gallon. and 1200 gallon. per, minute. The pump are 100 HP and 80 Hp which operate through  irrigation system of some l5 miles of 2,, to 10,, aluminum piping. There are over 1400 nozzles which are spaced- at about 20 per acre. The two pumps are run by diesel fuel and sit right on the bank of the river.

On the average, the enterprise yields about 4000 lbs. or 2 tons of berries to the acre.

To protect the plants and fruit, Ken has planted a system of shelter belts made up of about 3000 Russian Red-Twig. Willows, which grew very thickly and quickly,  and afford maximum protection from the elements.

Ken first started in lg78 with a single-row planter and due to expansion has by necessity changed to that of a row cultivator. planter and fertilizer equipment. The wind-down operation in the fall involves bales.

The wind-down operation in the fall involves the covering of all plants with .sufficient straw to protect them from our penetrating frosts and serve temperatures. To afford them this protection, Ken has in the335 past, covered the plants with about 15,000 square bales. However, he has now purchased new machinery. A Round Bale Mover and a Big Bale Bu,rg1 16u, allow, him to spread and shred about 800 of the round bales  compare to  the multi-handling of some 15,000 square bales.

In 1983 Ken had another parking lot constructed which now enables him customer parking of about 300 vehicles, .The office building and the old Kitchener School Building ( S.D No. 1076 ) which Ken has left in its original state. This school was officially  opened in  in1961.

The 80 years old Elm tree that shaded the Kitchener school children is now standing sentinel and watching with interest the new and fast growing industry, the “Strawberry Patch’ owned and operated by Ken Cybulsky, Fourth generation  pioneer  of the east bank of the red River. 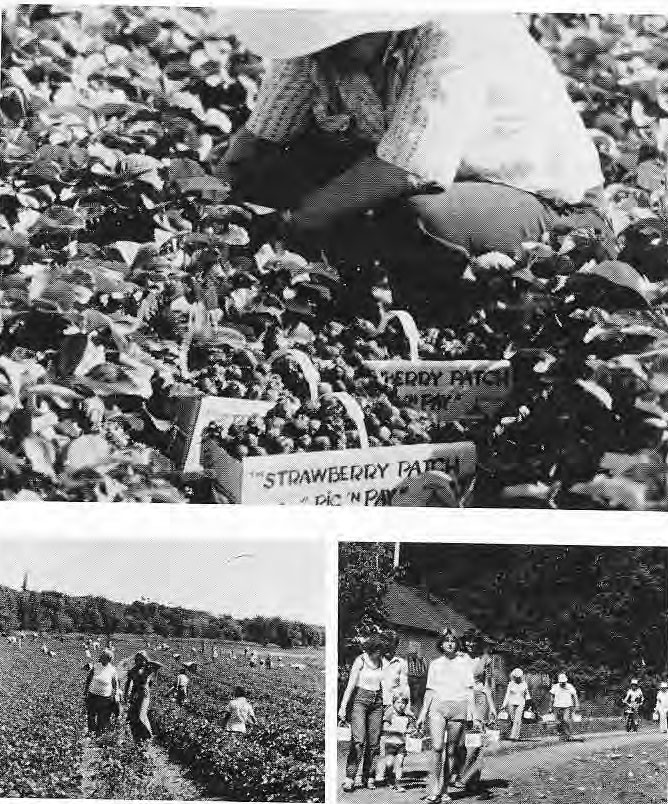