Around the time that ancient Greece was rising to power, Lockport and St. Clements were part of a bountiful region of hunting, fishing, and trading.

Long before European explorers reached the Red River valley, around the time that ancient Greece was rising to power, Lockport and St. Clements were part of a bountiful region of hunting, fishing, and trading. 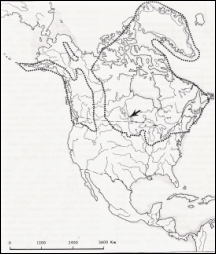 Map of glacier boundaries over North America in the Wisconsin era

From 70,000 to 10,000 years ago, 97% of Canada was covered with ice. This continental glacier, known as the Wisconsin glacier era, made life in most areas of North America uninhabitable.

However, around 10,000 years ago, when the glacier began to recede, much rich and fertile land was uncovered. With the melting of this glacier, endless amounts of water were deposited on the earth.

By 8000 BC, current day St. Clements was covered by the waters of Glacial Lake Agassiz, the largest freshwater lake on the continent. Although first explorers began arriving in Manitoba as early as 11,000 years ago, it was not until 6300-6000 BC that St. Clements’ region dried enough to become habitable.

How do we know this? Archeology provides the information. Archeology is the study of previous ways of life by analyzing all types of natural surroundings, and preserved objects, and mentally recreating a cultural lifestyle. Through archeology, it is estimated that First Nations explorers may have traveled the Selkirk area anywhere from 6500-5500 BC. However, more established bands were not present in the area until near 1000 BC, when they arrived in present day Lockport.

Archeological surveys done in the 1980s revealed much historic evidence of aboriginal settlement at the Lockport area. But why was Lockport such a favourable site?

Before the Lockport dam was completed in 1910, this area along the Red River was home to the St. Andrews Rapids. These rapids, falling over 15 feet in a 16-kilometer distance, attracted hunters over 300 years ago.

Huge herds of bison came to cross the river at the shallow waters. The fast moving waters over the rapids was also an “ideal spawning and feeding ground for fish [… and the bedrock of the rapids] provided people with large quantities of stone for making tools” (Bringing It All Together – Signage). Spring floods, which were more common at the time, spilled nutrients onto the surrounding soil, making the land very fertile.

Before 200 BC, the climate of the area was wetter and cloudier than today, with cooler summers, and more severe winter storms and spring flooding. The present-day forests had not reached our municipality, and the landscape was completely grassland.

The First People: The Larter Culture

Prehistory of this region is marked by specific cultural groups arriving/leaving the land. The first included the Larter Culture, which existed from 1000 – 200 BC. They were named for the family whose property held evidence of the early peoples, discovered in 1951.

They were the first group of people to occupy the Lockport area. Being nomadic people, their tools and houses were easily assembled/disassembled and transferred. The main purpose for coming here was because they “followed the bison to the shelter of the Red River Valley in the winter months. Bison bones and corner-notched dart points at the site show this” (Larter Culture – Signage).

Drawing of bison hunters and scenes from the Larter culture

Bison were very important to the Larter Culture. Early European accounts of bison sightings describe herds of thousands, which took three days to pass. The bison had many uses to the First Nations peoples. Its hide “was used for blankets, garments, boats, ropes and housing. The hoofs produced glue, and its sinews were used for bowstrings and twine. The meat was cut in strips and dried, and mixed with marrow and suet to create pemmican. The bones could be used for weapons and tools […]. Even the bison’s droppings were used as fuel for fires” (Silent Thunder – Signage).

To the First Nations peoples, the buffalo was also more than just a resource. “The buffalo was a part of us, his flesh and blood being absorbed by us until it became our own flesh and blood. Our clothing, our tipis, everything we needed for life came from the buffalo’s body. It was hard to say where the animal ended and the man began” – John [Fire] Lame Deer, Sioux medicine man, 1972 (Silent Thunder – Signage).

Following the Larter Culture, was the arrival of the Laurel Culture. The Laurel Culture was present on the Lockport site from 200 BC – 1000 AD. They were named for the Minnesota town where fragments of their pottery were found.

The Lockport area contained extensive historic evidence of these people.Several burial mounds were found near Lockport, decorated with items that may have been of value in the afterlife. It is evident that the cultures lived in numerous locations, with seasonal camps; their pottery fragments have been discovered as far north as St. Peter’s Church in East Selkirk, Manitoba. 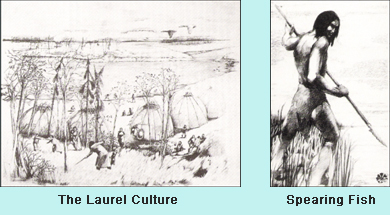 To understand the Laurel community one must also pay attention to their most valuable resource — fishing. The same species of fish were present in the Red River Valley for centuries. The channel catfish, pickerel, goldeye, lake sturgeon, suckers, freshwater drum and northern pike, were all used as a staple in their diet. [The fish were boiled or dried before eating.]

Fishing technology amongst early peoples reached a peak after A.D. 1000. One technique was to spear larger fish such as the giant sturgeon and channel catfish, using harpoons tipped with barbed bone points (An Account of Prehistoric Fishing at Lockport – Signage). Later, some netting was also used; these were gill nets with stones attached at the corners.

It was around 500 AD that the climate changed dramatically in the Red River region, developing into one similar to today. Then, in 1160, came a severe drought. The people of the Laurel Culture left without any further trace; not much is known of what happened to them.

In the 12th century, people in the Dakotas were experiencing severe droughts along with a population explosion. The people living there traveled north to Lockport, attracted by its ample moisture for horticulture; they arrived between 1000 and 1300 AD.

Archeological investigations conducted at Lockport in the 1980s unearthed charred corn kernels, hoes made from the shoulder-blades of bison, and underground storage pits which were up to two meters deep.

The pottery styles discovered originated among Native farming cultures of the upper Mississippi and Missouri river valleys. “Radiocarbon-dating charcoal and bone recovered at Lockport […] indicate that aboriginal people were planting corn there in 1400 AD” (Aboriginal Horticulture – Signage). They were the earliest pre-European farmers in Manitoba and may have had a population anywhere from 300 to 2000 people.

They also hunted “bison, rabbit, beaver, muskrat, moose, grouse, pelicans, and cranes. They fished for catfish, walleye, sturgeon, and pike in the fast moving waters of the Red River. They gathered hazelnuts, wild cherries, raspberries, and strawberries as well as a variety of seeds” (Corn Planting – Signage). It is believed that they kept their gardens on levees within the marsh. Although only evidence of corn has been found, it is assumed they farmed beans, squash, and sunflowers as well.

Radiocarbon-dating charcoal and bone recovered at Lockport […] indicate that aboriginal people were planting corn there in 1400 AD.

Some of the ways that corn was prepared included:

Farming with a hoe made from a bison shoulder blade

This farming by the aboriginal peoples, although limited, “represents the earliest known evidence of farming on the Canadian prairies, and the northernmost expressions of pre-European horticulture on the North American Continent” (First Farmers in the Red River Valley – Signage).

The last group of prehistoric peoples to live along the northern Red River was called the Selkirk Culture. They are the ancestors of the modern Cree Indians. They were dominant along the Red River all the way from Lockport to north of Selkirk.

Archeological evidence concerning these peoples was discovered during a restoration project of St. Peter’s Church in East Selkirk, Manitoba. One stage of the restoration project involved the removal of the deteriorating flooring within the church. While removing the flooring, traces of early aboriginal lifestyles were found dating back nearly 800 years ago. 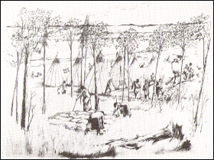 After digging a mere one metre below the surface, they found fragments of pottery, stone tools, bison bones and traces of a hearth or fire pit. There were also fragments of Selkirk Culture pottery found dating back between 800 and 1750 A.D.The Selkirk Culture lived in the region until around 300 years ago, when the European fur trade began in this region.

Kenosewun (ke-no’-se-wun), which is a Cree word meaning There are many fishes, is a fitting name to the Lockport site which was settled for its abundance of fish and wildlife. It is because of these resources that our municipal area was a wonder of activity, long before history was ever recorded.