The history of Corpus Christi began over 75 years ago with just eight families in 1907, when it was founded and it has now grown to more than 100 families of different ethnic backgrounds. Corpus Christi (Body of Christ) is situated at 5819 Henderson Hwy., Narol. The following story of this little church has been compiled from conversations with the descendants of the founders together with information extracted from the original books of minutes. 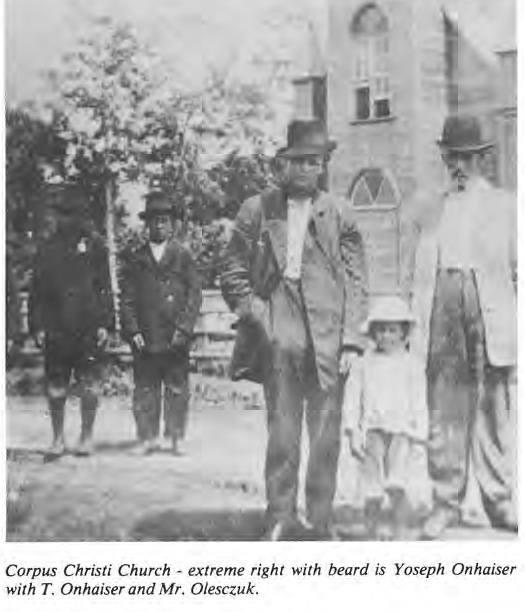 In the year 1900, certain Polish people immigrated to this area from Poland. They held weekly devotions in the home of Mr. Jozef Onhajzer for several years and although they were experiencing extremely hard times, they began a “Church Treasury Fund”. By 1904, a one acre parcel (99′ x 440′) of land was purchased from Mr. Franciszek Tomczak for $50.00, who also donated $25.00 around the same time. Mr. Anton Wachal, Mr. Walenty Wisniewski and Mr. Jozef Szajewski were in the process of clearing an atea for a cemetery when Mr. Szajewski said he wondered who would be the first among them to be buried on that spot and just twelve months later, it was he. A huge wooden cross was erected to mark the cemetery.

The first recorded minutes of April 17, 1906 (written in Polish) reveals that the “Church treasury fund” balance was $165.00 and discussions commenced regarding the construction of a church building. Mr. Harcus was hired to be the builder with the voluntary help of all the parishioners. The records show that the first eight people were: Mr. Franciszek Tomczak, Mr. Franciszek Oleszczuk, Mr. Jozef Onhajzer, Mr. Antoni Wachal, Mr. Grzegosz Szajewski, Mr. Jan Hoc, Mr. Jan Wachal, and Mr. Waclaw Wachal.

The presiding pastor and secretary was Rev. Fr. B. Kowalski, omit. The first elected parish treasurer (with six out of eight votes) was Mr. F. Tomczak and the first trustees were: Mr. J. Onhajzer and Mr. F. Oleszczuk. These three names were placed in a little green bottle and buried either beneath the building formation or beneath the soil where the huge wooden cross had been erected. On Aug. 25, 1906, a discussion regarding the name of the Church took place and the two other names that had been considered were: “Our Lady of Scapular” and “St. Michaels”.

In 1907, Mr. F. Tomczak donated the large Sacred Heart statue which is presently fixed above the center altar. Father F. Kowalski had been invited to say Mass at different homes every 6 weeks and he would stay for two to three days at which time he would have catechism classes for the children. Everyone took turns meeting him at the station to help with his bags.

By June 16, 1907, although incomplete, the church building was being used for prayer meetings and on June 24, 1907, it was blessed. On this happy occasion, hereafter called Corpus Christi Day, the following six children received their first Holy Communion: Wladyslaw Tomczak, Stanislaw Tomczak, Franciszek Oleszczuk, Jan Szajewski, Miss Bronislawa Onhajzer, (Mr. Majewski who died in 1983 and was buried in Teulon) and Miss Stanislawa Cieslik, who married Mr. Kryschuk and she died in 1982.

By 1912, it was apparent that the building had to be enlarged to accommodate the increasing number of parishioners and so it was.

In 1940, (war time) the original structure had to be torn down to make way for a new building which included a full basement. The Archdiocese of Saint-Boniface has recorded Corpus Christi as being a chaplaincy attended from East Selkirk ever since that time because St. Stanislaus, E.S., which was declared a “parish” had also constructed a rectory.

It was not until 1949 that the women functioned under the umbrella of the Catholic Women’s League of Canada, although they had always been actively supportive from the beginning by way of establishing a Rosary Society and by holding fund raising activities such as teas and church picnics. 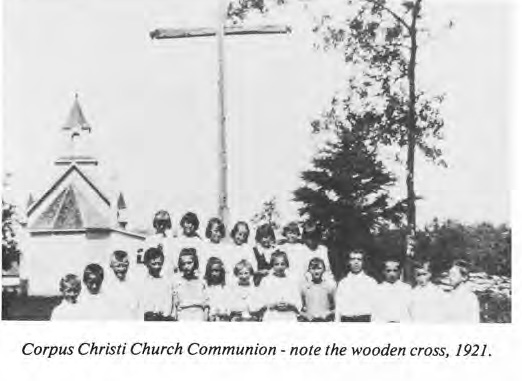 Tekla Huzarski and Apolinia Onhajzer were instrumental in founding the Rosary Society. In 1955, Mr. Paul Kruger donated the chandelier Corpus Christi Church Communion – note the wooden cross, 1921. which proudly hangs in the center of the Church and in 1963 another acre of land was purchased adjacent to the first parcel from Mr. F. Tomczak’s son, Charlie, for $600.00. This was necessary to expand the cemetery. In 1966, a long narrow strip of land along the South side of the original site was also purchased from Mr. Charlie Tomczak for $518.00, to make room for cars to gain access to the cemetery. In 1972 the Minkus family donated the baptismal font in memory of their daughter, Cheryl Ann. In 1978, Mr. and Mrs. Marcel Perchotte returned from Rome, Italy with a large Rosary which had been blessed by Pope John l, at His first General Audience on Sept. 6, first 22 days before his death) and was donated and placed on the North side altar.

In addition to the numerous functions that are sponsored by the C.W.L. and the Knight’s of Columbus, coffee is available after Sunday Mass to help newcomers get acquainted and to encourage friendly conversations. This project began on May 6, 1979 and although it was never aimed at profit-making, the generous contributions have afforded a Religious Library. At the time of this writing, there are over 115 children’s books to choose from. As of Nov. 1983, plans are underway to begin an Adult Bible Study program once again and the excess funds from the coffee contributions has also afforded a Bible Dictionary and a Commentary which are two of the main tools that will be needed.

There is no doubt, that God is the ultimate cause of any achievement, therefore let us be thankful for His Limitless blessings and for the following pastors for the growth and vitality that has characterized Corpus Christi and is so obvious today: 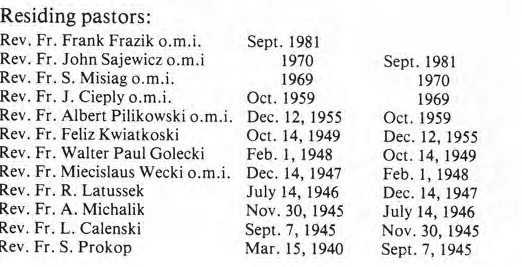 Sincere gratitude is to be given to Mr.’ Frank Wachal and Mr. Charlie Tomczak for their long years of devotion to this little chapel and for their eagerness in providing much of the above information’ Many thanks to Helen Doherty also for her efforts in submitting her story and pictures. I am grateful and honored to have been asked by Mr. Ray Minkus and Mr. Frank Wachal to compile this story. Thank You.

When the above story was read, many people pointed out that much has been omitted. Therefore, efforts are being made to organize a committee to compile all the valuable information and publish the same’ into a souvenir booklet.

The Rosary Society was started in Corpus Christi parish in 1907. A Rosary Society consists of prayer groups, each group with 15 members, one member for each mystery of the Rosary. The members pray the rosary on a regular basis. Our parish has 2 groups. The first group leaders were Mrs. Apolonia Onhaiser and Mrs. Eva Tomczak. Over the years the leaders have been the wife of Gustav Ludwick, Mrs. Annie Ludwick and Mrs. Agnes Gusnoski. The present leaders are Mrs. Hedwig Natuik and Mrs. Mary Wachal. The prayers have been continuing for over 75 years and are still doing so today. The rosary is prayed after mass on the first Sunday of each month. 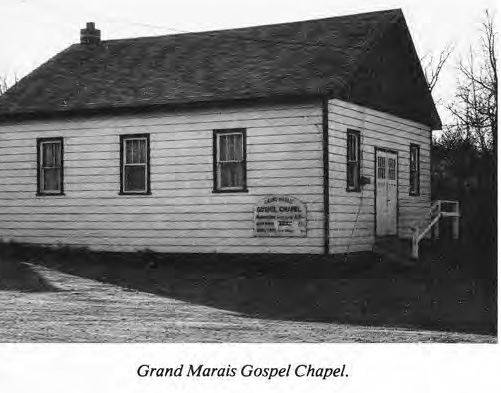