In the village and district of East Selkirk, the Roman Catholic Church of St. Stanislaus has been very visibly present and making an enriching contribution to the life of the municipality for almost seventy-five years. The history of this Church is the history of the congregation which has gathered under its roof to worship together, to be nourished and to be inspired as its members sought to make their contribution to the development of the life and history of the municipality of St. Clements.

Indeed, various members of the congregation have made their contributions in the fields of education, sports, music, agriculture as well as other areas. One of the most visible contributions has been in the development and maintenance of the cemetery in East Selkirk to receive and provide a final place of rest for those who have died and are now awaiting the Resurrection.

The St. Stanislaus Council of the Catholic Women’s League, an organization of women which is national in its scope and organization, has been part of the history and work of the St. Stanislaus parish community since June l, 1949 when it was formed with Father Latussek as director and Mrs. S. Rokosh as first president. 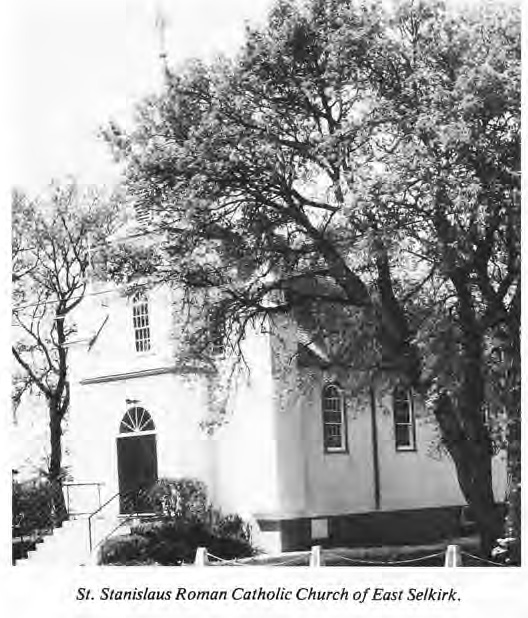 Previously, there had been a ladies’ organization founded July 27, 1946, The Ladies of the Holy Altar Society. Its first president was Mrs. A. Verheul. These organizations have contributed much to the furnishing and upkeep of the Church. The Catholic Women’s League has also provided community service through the years in the form of raising and donating funds towards the furnishing of St. Mary’s Ward in the new Selkirk General Hospital in December of 1954 and in the form of further donations in 1958 and in 1961 towards the expense of painting the same ward. The Catholic Women’s League of St. Stanislaus Council continues its work of support today under the able presidency of Mrs. Eileen Andrayko and the directorship of Father Frank Frazik, omi.

The early years of St. Stanislaus are also the early years of the Polish immigrants to East Selkirk as the bulk- of the pioneers of the parish were of Polish origin. In the past twenty-five years, we see a marked evolution from the profoundly Polish character of the parish. Today, however, the membership of the congregation comprises people of diverse ethnic origins all sharing allegiance to the catholic mark of the Church.

Some of the first Polish immigrants to the East Selkirk district were cleared through the immigration hall in East Selkirk in 1897. For approximately ten years, the settlers attended worship at St. Michael’s Church in Cook’s Creek. In 1910, the Wolanczuk brothers, John Starodub, Kasper Ogonowski and John Rokosz began to make plans for a chapel in the East Selkirk area and set to work preparing logs for construction. In 1912, they erected a little chapel in East Selkirk. Until 1924, worship was held in the chapel a few times a year. By 1937, the parish had grown too large for the original chapel, and a new church was built under the pastor ship of Father D’Eschambault who had learned Polish in order to be of service to the Roman Catholic communities of Polish origins. In 1948, a residence was built and in 1953 the Church building was enlarged under the pastor ship of Father Felix Kwiatkowski. Throughout the years since then, the physical plant of the parish has been consistently subjected to improvements.

In May of 1973, those of the pioneers who were still alive experienced the joy of seeing the crowning of their efforts at founding and maintaining a Catholic Christian community. A vocation to the religious life or priestly ministry represents a sign of the maturity of a Catholic community. On May 19, 1973, the pioneers and more recent members of the parish witnessed and celebrated the ordination to the priesthood of Father Carl J. Tarnopolski whose family had been part of the St. Stanislaus community since 1948.

Under the pastor ship of the present pastor, Father Frank Frazik, omi, the community of St. Stanislaus faces the challenges of the future as, true to the traditions of their forebears, they continue to work to maintain and develop as one Christian community among the several that make their home in the municipality of St. Clements.

Together, these Christian communities have the responsibility of meeting the spiritual needs of their members and of continuing the mission entrusted to them by God of being a Christian presence contributing to the life and welfare of the municipality as well as reaching out to answer needs beyond the municipality’s boundaries, thus assisting the municipality in being a life giving and life-enriching presence in the province and the country.