The history of the St. Nicholas Parish commences with the year 1896-1897 when immigrants from Bukowina settled in the Gonor district. In reviewing the history it is interesting to note that the Gonor district was already established by a Jesuit Missionary, called Father de Gonnor, who through his efforts, assisted la Verendrye, the explorer, and some years later, the C.P.R. in 1877. 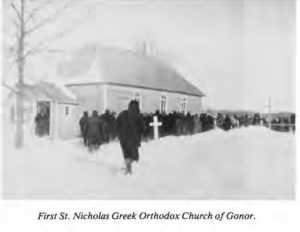 As the Ukrainian settlers emigrated to Canada, one of the terminal depots was here in East Selkirk, and from this point they travelled and walked to settle along the bank of the Red River in the Gonor district.

Since faith, physical strength, and hope, were their assets, the church and religion was very important in the lives of these early pioneers. They could not tolerate the lack of facilities, especially the church edifice, where they could individually and corporately open up their hearts to God. These early settlers soon organized themselves, and made plans for the construction of our first church in 1904. The church and belfry were made of logs, which were brought in from the area which is now known as Birds Hill Park.

The twelve founding members of the St. Nicholas Parish were Dmetro Chopek, George Bazan, Mike Bazan, John Pawluk, Nick Gowryluk, Dmetro Krawchuk, John Gowryluk, Micheal Arseny, William Snatenchuk, John Bazan, Victor Lupul, and Kost. As we study the archives of the parish, we note that the two 112 acre parcels of land were purchased for the church and cemetery from the late Mr. Nicholas Cowryluk and the late Alexander Macodon for the price of $10.00.

Later, the manse was built next to the church where the parish priest resided and where members gathered for their regular parish functions and meetings.

The church bell, which bears the year 1907 (which is in your church brochure) was imported from Bukowina. According to the information that is available, the bell arrived at the station in East Selkirk and because of the lack of communication and transportation, the bell was left at the station for approximately two months before it was delivered by ox-cart to its present location.

The trees that border the perimeter of the churchyard were planted by Mr. Zaversniuk, Nick Pawluk, Theodore Nahorney, Steve Pawluk and Eli Boyko.

In April 1944, both the original church building and manse were destroyed by an accidental grass fire. The original belfrey containing the bell from Bukowina was saved and is still in use today.

Immediately thereafter, in 1945, it was resolved to build a new church building, which upon completion, the congregation had the pleasure of having Rev. Doctor Shewchuk perform the first service in the new building.

The present church is approximately 1,100 square feet in area, is built of lumber and it takes on the form of Byzantine architecture. Mr. Anton Prychun, a resident of Tyndall, Man., was the master builder and all others worked under his supervision. The total cost of the building with labor and materials at that time was approximately $5,000.00. All labor, with the exception of the head carpenter and painter, was provided free of charge.

On May 26th, 1950 three of our parish members, Mr. Peter Sandelowich, Mr. Steve Pawluk and the late Mr. George Chopek made an agreement with Mr. John Pushka to paint and decorate the church in the following manner: The ceiling has sky-blue oil paint spangled with white stars. The dome has cherubim angels on and between clouds on a sky-blue background. The altar, known as the Holy of Holies, is painted in a similar manner. The walls are painted a cream color and a border is stenciled in a Ukrainian motif throughout the church. The wainscoting has an oil paint, the final coat being panelled off into panels of marble and granite.

The entire Ikonastos is painted and decorated in the Eastern style. This consists of the picture of Jesus crucified at Golgotha, the Last Supper, and the twelve apostles. All are done in the true Ukrainian Greek Orthodox tradition.

Mr. Pushka made a donation of the four pictures of the four writers of the Holy Gospels, St. Mathew, Mark, Luke and John. These are painted on canvas affixed to their proper place on the walls and in order.

Prior to 1965, special church dinners and meetings were held in the homes of the members of the parish. This situation was rectified by purchasing a parish hall from West Selkirk and moving it to its present location in the churchyard.

In 1966 a well was drilled near the hall for domestic use.

In 1973 the original covering of imitation siding on the outside walls of the church was removed and a stucco finish was applied.

In 1978, under the chairmanship of Rudy Zibroski, the belfrey floor and bottom plates of the structure were renewed. Also a new metal fence made of steel harrow bars was installed in front of the property.

Since the cemetery is an intricate part of the churchyard, it is interesting to note the character of the memorial markers that are standing.

As economic conditions improved we have the modern design stone granite markers.

The first priests to serve in the original church building were from the Russian Orthodox Mission. Commencing with the organization of the Ukrainian Greek Orthodox Church of Canada, this parish served henceforth by Ukrainian Orthodox Priests. For a number of years this parish was served by the Winnipeg and district priests and is now under the spiritual care of the Rev. Fr. D. Luchak. 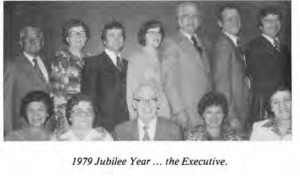 The Parish executive in this Jubilee Year (1979) are as Follows:

Members of the executive are John Pihulak, Henry

Members of the Women’s Auxiliary are as follows:

The renovations to the interior of the Parish Hall which was completed in 1982 cost a total of $5,000.00. This consisted of the removal of the front stage, adding a feature wall, alternation of kitchen facilities from the basement to main floor and the updating of all electrical wiring. 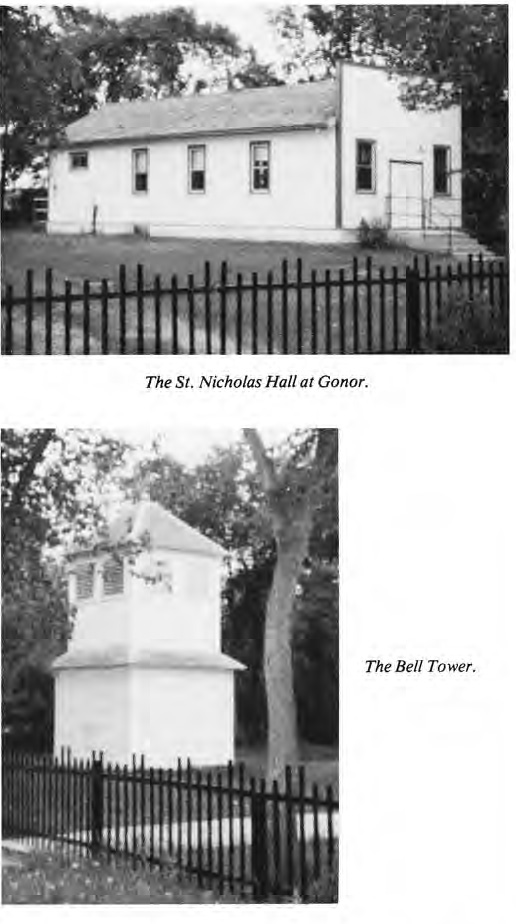