With the advent of the immigrants into Canada, the Ukrainian settlers of East Selkirk wanted a Ukrainian Church. During the months of Oct. l-Dec. l, 1914, a church was built across from the Happy Thought School. It was called the Ukrainian Apostolic Catholic Church of St. Michael. Bishop Paul (Markevich) was the minister at that time. The first meeting in the home of John Kalinski on Jan. 20, 1915. Bishop Paul opened the meeting with a prayer, John Kowalski acted as chairman, and a Theology Student Rev. J. Kusee was Secretary. The executive chosen at that time was Wm. Kologinski, Stefan Ivanchuk and Nazarko Zahayko.

In 1920 the church purchased a piece of land for the sum of $1200.00 from Alex Shastko and built a Reading Hall and named it after an outstanding Ukrainian named Myroslow Shechinski. In that same year the name of the Church was changed to St. Michael’s Ukr. Greek Orthodox. 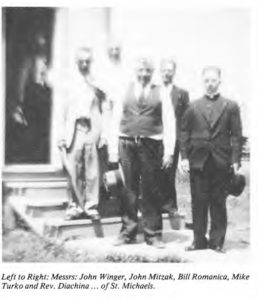 In the later 1970’s the interior of the church was dismantled and the church furnishings were donated to a new Ukrainian Orthodox Church in Thompson, Man.