St. Clements has the only Brick making plant in Manitoba. It has been stated that “Brick is the oldest manufactured building material known to man.” The earliest known manufacture and use of brick can be dated at about 6800 B.C. from the ancient Jericho ruins.

The clays and shale of Manitoba are quite extensive and widespread throughout the province and have supported the ceramic industry dating back to the 1870’s. It would appear that 1871 was one of the first attempts at brick making near Omand’s Creek with the first “plant” credited to Dr. Schultz, for the making of common brick. In 1879 the Sutherland and Brydon plant was producing pottery in our area here while at least three plants were in operation in and around Winnipeg by 1886, we had 6 plants in operation in Manitoba because plants had been opened up at Emerson, Portage la Prairie and Rapid City. From 1908-1913 was a boom period with 33 plants producing common brick at the rate of 25 to 87 million. Burning was mainly done in Kilns using dry wood as fuel while a few had down draft kilns and used coal. 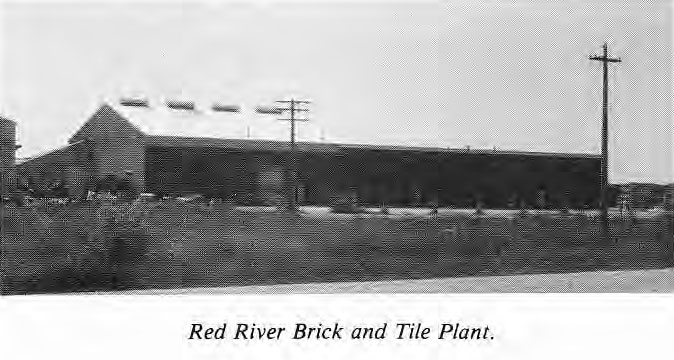 In 1915 we only had 12 plants in the province and from 1915 to 1929 could be called our slow period, it dwindled away to about 5 to 7, During the depression years from about 1929 to 1933 only 4 plants survived. One of the survivors was the War drop plant at Whitemouth. From 1939 to 1945 found only 1 plant, the Alsip, in operation. After that many started up and failed for one reason or another, and then there was none,

Following exhaustive clay prospecting in Manitoba and extensive market research during the early 1960’s a decision was reached to build a brick plant on the east side of the Red River, near Lockport, in the R.M. of St. Clements. The development of suitable raw materials for this plant was begun in 1962  and in 1963 drilling programs were carried out in the search for the needed clays and further drilling in 1969-1970 for reserve clay supplies to justify the commencing of this industry.

The Red River Brick and Tile Co. built their plant on Hwy. No. 44 just east of Lockport and opened for business and production in Oct. 1970/71. It had the capacity of producing 20 million finished bricks annually, and represented an investment of well over the $2 million mark.

This plant used clays from at least five different pits: St. Rose du Lac, Leadwood has 2 pits, Modern and Odanah. The Ste. Rose pit is 185 miles from the plant, Ladywood about 28 miles and the latter two require at least 100 miles of travel to the plant.

These five pits give the Brick Company 8 types of clays and shale to work from which produces the face colours ranging from near black and red to near white, including variegated colours.

For record purposes, so that the next generation will not have to research data source, the Brokenhead pit is located just east of Ladywood and is near the Brokenhead River on the West bank.

The other Brokenhead pit is a small pit containing good clean silica sand and lies just off municipal highway No. 317, nearly mid-way between highways No. 12 and No.59.
All the clay is generally mined and stockpiled at the pit site and then hauled by truck to the plant where they can turn out about 55,000 bricks per day.

In 1974 the plant underwent modification and expansion with the addition of important equipment installations.

As of 1983, this is the only brick plant in full operation within the Province of Manitoba. It is a division of l. XL Industries Ltd.

Other plants operating within the province number only 5 and they produce cement, expanded aggregate products as well as dry and activated Bentonite.

The Red River Brick and Tile are the only Fire and Pressed Face Bricks company operating within Manitoba and they chose our munc. because St. Clements was an ideal location close to railroad and major transport routes. The relationship between the company and the munc. has always been ideal and the clean environment orders have been minimal because they run a clean shop operation.

Rumours that the Company plan a major move of operation to Alberta has not resulted in any firm decision by officials and the plant continues to function as before.

The East Selkirk area had at least five brick plants in operation west of Cook’s Creek, running toward the Red River. They were doing a booming business during the late 1870’s. The Roundhouse was built from this brick and most of the brick used in the City of of Selkirk.