Home » Community » Transportation » Influence of the River » Navigating the Red: Steamships and the Colville Landing 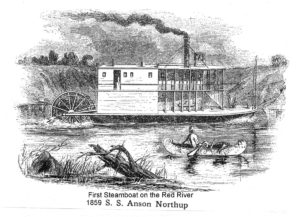 At one time in history, the Rural Municipality of St. Clements was home to a very prosperous harbour. The Colville Landing played host to numerous steamships which traveled through the region. Trade soared in western Canada with the introduction of this effective method of transportation. Steamship transportation on the Red increased trade, transportation, and encouraged settlement in the area.

The first steamship to reach the Red River was the Anson Northup, in 1859. The hull of the steamer was 90 feet long and with the addition of the stern wheel, she measured a total of 100 feet. Her beam was 24 feet long and she had a carrying capacity of 75 tons. She drew two and a half feet of water, allowing her to navigate the shallow river, and had two spacious decks. The first deck was for the machinery parts, such as the boiler and wood box and contained the cargo space; the second deck had a cabin with 24 berths in addition to four staterooms. Constructed in June 1859, the Anson Northup revolutionized water transportation and began a new era of trade in this region. Her career proved that steamboats could operate in the shallow inland waterways of the prairies. The steamer was also known as The Pioneer later towards the end of its existence, which was very suitable as it prepared the way for great events to come. The Northup ended its great career docked at the mouth of Cooks Creek, near East Selkirk, for three years before it sank in the winter of 1861. 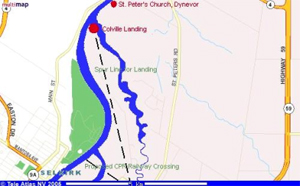 Many other larger and more efficiently designed steamships were created to ply western waters. They were soon seen as far away as the North Saskatchewan River, the Qu’Appelle, and even the headwaters of the Assiniboine. With greater carrying capacity, they provided a cheaper and safer method of freighting goods and passengers than a canoe, York boat, or oxcart.In 1870, the Hudson’s Bay Company built the SS Chief Commissioner at Lower Fort Garry, using the boiler reclaimed from the Anson Northup. The steamship, although using parts from the famous pioneering vessel, proved a great disappointment; its shallow draft made it extremely unsuitable for the rough waters of Lake Winnipeg and there were numerous problems with its boiler and other machinery. Some people even considered its construction amateurish. In spite of this, the Chief Commissioner was used for a few years before it was dismantled in 1875. Its hull was then transported to Lower Fort Garry where it was used as a well-known floating warehouse. Parts of the Commissioner were later used to build the SS Colvile, a dramatic improvement in steamship design.
The HBC hired Captain J. Reeves as supervisor and examiner for the construction of the SS Colvile at Grand Forks. Considered one of the greatest ships that the HBC had ever constructed, the Colvile provided easy trade access to the areas around Lake Winnipeg. By 1878, this ship was an essential part of the Company’s integrated transportation route from Red River to Fort Edmonton. 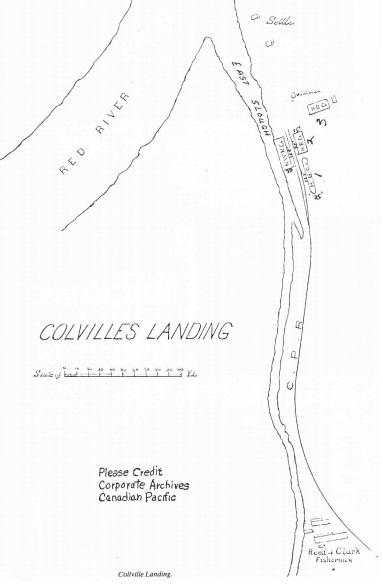 In 1878, when a railway connection was built to East Selkirk, the HBC anticipated that a bridge might be constructed across the river to join the rail line at Selkirk. Many companies established commercial enterprises in the area in hopes of profiting from the potential railway. Previously, the HBC had used the mouth of Cooks Creek for wintering its boats and Lower Fort Garry as a warehouse and docking facility. It was obvious, however, that creating a harbour would be much more convenient. The HBC then decided to develop the east slough, on the east side of the river, as their warehouse and trans-shipment point for goods destined for the Saskatchewan River. Charles John Brydges, the HBC Land Commissioner, journeyed to Selkirk to see if a suitable warehouse spot could be found from which to load the SS Colvile. He noted, “The government have agreed to put a track to the water’s edge, where a warehouse can be erected, and then all goods for the Saskatchewan and Lake Winnipeg districts can be sent direct to that warehouse.” That fall, the Canadian government built a short spur line to what would become Colvile Landing.
Originally, the Colville Landing was known as Colvile Landing, the name of the company’s successful steamship, the SS Colvile. The ship, in turn, had been named for two successful past administrators of the Company, Andrew Wedderburn Colvile, Deputy Governor of the HBC, and Eden Colvile, Governor of Rupert’s Land.

Mr. David Douglas was the contractor for the railway and he constructed the two-mile spur line to Colville Landing in record-breaking time, beginning on May 12, 1880 and finishing on July 20, 1880. Everyone was eager to complete the spur line and harbour in hopes that the harbour would develop into a very prosperous commercial centre. 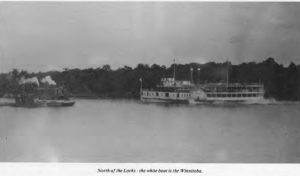 Winnitoba North of the Locks

In 1881 the HBC created the harbour of Colvile Landing, with a shipping wharf and warehouse in the east slough, at the mouth of Cook’s Creek. In winter 1880/1881, two buildings were transported from Lower Fort Garry to the landing. One of the most famous rumors attributed to these buildings, was that one of them was a former military barracks. Supposedly, this building transformed into a warehouse, came from Lower Fort Garry. Soon after, the Hudson’s Bay Company established a very large store at this location. The Manitoba Weekly Press described the building as a, “large and handsome store…one of the finest and largest in the Province outside of Winnipeg, and is fitted up in elaborate style.” It was presumed that it would supply the wants and needs of the growing number of settlers, and would serve a hinterland of wheat-producing lands in the Northwest. However, the HBC was not the only company trading in the area. There was a great deal of competition from a nearby fishing business and several lumbering firms, all of them trying to supply the lower price for the goods. Many settlers located in this prospering area. For the next twenty years, the Colvile continuously took on cargo from rail cars arriving from the east CPR spur line and transported goods throughout the region. However, the ship’s career ended when it was destroyed by fire in 1894 at Grand Rapids, signaling the inevitable end of its harbour as well.The Colville Landing was doomed to failure. Over time, many of the commercial buildings caught fire and burnt to the ground. Some were rebuilt, but investing increasing amounts of money was risky, given the aggressive challenge from Selkirk to become the major trading centre in the region. Establishments on the west side slough attracted other business, leaving Colville harbour without a stable economy. Over time, trade slowly dwindled on the east side. As railway construction progressed further westward, it became cheaper and more efficient to transport goods by rail to the posts in Western Canada. After a few more years, the Colville Landing was considered obsolete and became another Manitoba “ghost town/harbour.” Fire damage took its toll on any remaining buildings and all that remains today are its historic ties to Lower Fort Garry.

For more information on steamships and other marine history, visit the Marine Museum in Selkirk, Manitoba. http://www.marinemuseum.ca/