Mary Innis Mackenzie was born in Glenrinnes, Dufftown, Banffshire, Scotland on August 4, 1861. At age 25 she married Presbyterian minister, Ewan Mackenzie, in Scotland.8 Mary joined her husband in missionary work and shortly after their marriage the couple travelled to Nova Scotia.

Mr. & Mrs. Mackenzie made at least one trip back to Scotland before venturing to western Canada at an unknown date. They began missionary work among the aboriginal people of Hurricane Hills Reserve, Saskatchewan. 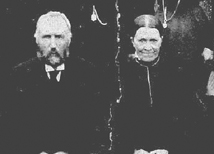 Mary and Ewan raised a young aboriginal girl while living in the community. They lived among the aboriginal people until 1915 when Ewan Mackenzie died. He was buried in this settlement.

Until 1915 Mr. and Mrs. Mackenzie were our Missionaries to the Indians at Hurricane Hills Reserve in Saskatchewan, among the Dakotas. On the death of her husband in that year she was appointed by Presbytery to continue the work of teaching the Indians in the Way of Life, which she did faithfully until 1917, when she came for a rest to live with her sister at Gonor.

Mary Mackenzie came to St. Clements in 1917 and purchased property south of present Mackenzie church property near Lockport on the east side of Henderson Hwy. She lived in a shanty that was later moved to the location of present Mackenzie property.10 The aboriginal girl raised by Mary and Ewan did not come with Mary to Manitoba. Mary’s sister, Anna Innis, came from Scotland to live and work with Mary. Both women were teachers.

Mary immediately found a need to help Anglo Saxon and Native people and began missionary work once again. She formed a Sunday School in her own home, and as the group grew, she rented a tent through the summer to accommodate them. The congregation was kept warm during the winter months with the construction of a shanty, equipped with a wood stove.

Mary received financial support from the Women’s Missionary Society, in Toronto. She organized a branch of the Women Missionary Society in the district and through her WMS connections brought many supplies to the needy. Bundles of clothes, children’s toys, and winter wear were sent to Manitoba from wealthy individuals in Toronto .

Mary received financial support from the Women’s Missionary Society, in Toronto. She organized a branch of the Women Missionary Society in the district and through her WMS connections brought many supplies to the needy. Bundles of clothes, children’s toys, and winter wear were sent to Manitoba from wealthy individuals in Toronto .

The Presbyterian Church gave recognition and respect to the woman and her work in 1951. A monument and plague was dedicated to Mary Mackenzie in Celebration of the John Black Cemetery. John Black was the first Presbyterian minister to come to Rupert’s Land; to be honoured in celebration of him demonstrates genuine respect for Mary Mackenzie. Mary became a Deaconess, an active leader and supporter of Mackenzie Presbyterian church until her death on December 6, 1948 at the home of Maggie and Andrew Mazurko in Selkirk.

An Oral History of Mary Mackenzie

Steve Rapko is very knowledgeable regarding the life of Mrs. Mary Mackenzie and the church that bears her name. Steve explained that Mrs. Mackenzie came to the district when his parents were alive and he was just a “young boy.”

His memories of her are fond ones that bring a smile to his face each time he dips into the memory bank to retrieve a story about this “Godly” women and the years of dedicated service she freely gave.

Steve explained that Mary Mackenzie came from Scotland with her missionary husband Ewan Mackenzie. They settled in Hurricane Hills, Sask. and did missionary/ministry work with the aboriginal people. They raised a young aboriginal girl together while living in the community. Mr. Mackenzie died in 1915 and Mrs. Mackenzie stayed for two years after his death. For reasons unknown, she came to Manitoba. The young girl was grown and chose to stay among her own people. Mary Mackenzie was tired and wanted a place to retire, her age at this time would have been 56. Her sister Miss Anna Innis, came from Scotland to join Mary in retirement. Both women had been teachers throughout their lives and the calling to help others was still very strong. Mary had another sister, a poet whose poems were never published, she died at the tender age of 18.

Mary’s first residence was south of the present church on the east side of Henderson Hwy. There, she lived in a shanty that was later moved to Lot 120, present site of church. Mary and Anna’s home was near the bank of the Red River. The little house had a large veranda that welcomed visiting guests and was well protected by the many trees that surrounded it. The trees surrounding the house were so large that they prevented the sunlight from entering the house. This property ran back from the present church towards the river. Mary and Anna’s house was a community focal point and the center of activity. At the height of her work she would have 60 children attending her Sunday school. In the summer months a tent was used as a Sunday school and in the winter the old shanty was heated by a wood stove.

In 1930 the church was built with financial support from the Women’s Missionary Society and a Winnipeg construction company built the structure. Steve said that inexpensive materials were used as there was not a surplus of money. For fifty years this little church was used for Church services, Sunday school classes, marriage and baptismal ceremonies, and funerals. The church was not self-supporting therefore, many individuals contributed to the Sunday sermon; Theology students, Lay people, Deaconesses, and Ordained Ministers.

Mary was connected to the Women’s Missionary Society in Toronto and through this organization she was able to provide many physical necessities such as clothes, toys, footwear, and winter wear to the community. Mary also filled the spiritual and emotional needs of many through her effortless missionary work and the constructing of Mackenzie Presbyterian Church.

Steve described Mary Mackenzie as a true pioneer, a brave soul, and a well respected lady. He spoke of her early transportation, a one-horse buggy, that took her to visit the sick and elderly.