In 1919 Mrs. MacKenzie came to East St. Clements with her sister Miss Anna Innis. They lived on a 10 acre lot, just back of the church as we know it today. There she planned to retire but soon found herself teaching Sunday School in her own home. When the group became too large, she rented a tent for the summer. A shanty was built to shelter her congregation in the winter. They also opened a work for the young people which gradually grew until their resources were exhausted. In 1921 the Presbytery of Winnipeg came to their rescue, acknowledging the work and recommending that the Women’s Missionary Society assume the responsibility for the work. 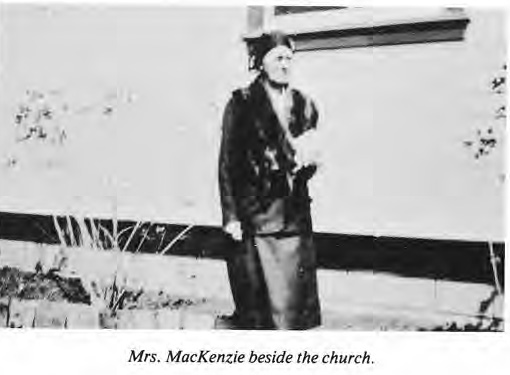 In 1926, Mary MacKenzie, now a Deaconess, was appointed to the staff of The Presbyterian Women’s Missionary Society. She organized a branch of the Women’s Missionary Society in the district where the group did Red Cross work during the war and saw that the needy in the area received articles of clothing, such as sweaters, mittens, toques and toys. Many a little girls heart beat with joy at receiving their first doll and boys their first trucks.

Mrs. MacKenzie donated the property for the church which was built in 1930 and called ‘ALL PEOPLE’S MISSION’. Each Sunday she drove 5 miles to Ashfield and 3 miles to Gonor to preach. She labored in our area from 1921 to 1942 and went to her heavenly rest Dec. 6, 1948. After Mrs. Mackenzie’s death, the name of the church was changed to “Mackenzie Presbyterian Church” in her honour. She was always ready to give a helping hand to anyone who needed it, visiting the sick and comforting those in sorrow, always doing acts of kindness. The church supplied not only the spiritual needs but also the recreational needs of the people. 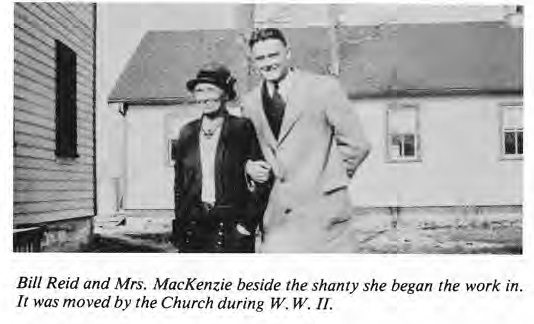 We thank God for Mary Mackenzie’s dedication and faithfulness. She will never be forgotten for her great work. May we, who follow after her, carry on in faith the work begun by her for God’s glory and praise.

McKenzie Church has seen many changes through its sixty-two years in existence. It has survived some thirty student workers, laymen and ordained preachers. Mrs. Mary McKenzie founded the work and served for twenty one years, 1921 to 1942. Rev. Earle Wanamaker 6 years, 1963-1969. The latest minister being Rev. Ivan Carroll, Minister of the Knox Presbyterian Church, in West Selkirk, who served the congregation for the past 14 years, 1969-1983. At present we have a student, Richard Hein. Student workers usually stayed for three months to, two or three years. Deaconesses stayed that long too. 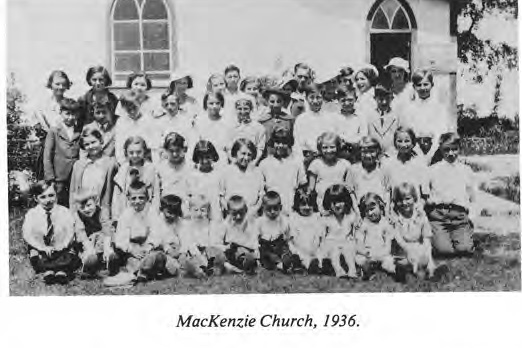 Sunday School has been held weekly on a regular basis winter and summer with a very good attendance, as many as 65 on the roll. 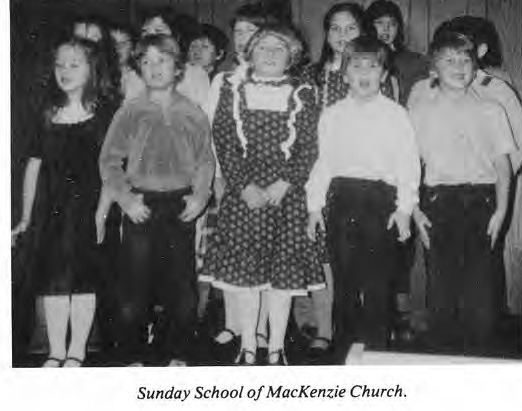 The Sunday School work is carried on by dedicated teachers from the congregation. Today we are seeing the third generation growing up in the faith. Thanks to such 60th Anniversary of MacKenzie Church, 1981. faithful teachers who gave of their going through the years. 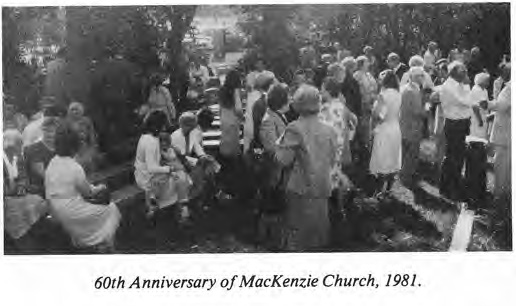 In 1981, the McKenzie Church congregation celebrated their 60th Anniversary on Sept. 13, 1981. Well over a hundred people were present: Former pastors, members, and friends all joined in a happy time of reunion, reminiscing, fellowship and blessing. It was a beautiful day and lunch was served outdoors. The service was a blessing to all who came as former choir members joined in bringing special numbers in songs of praise to God. There was one hymn sung in Ukrainian “This World is not my home”, done by former choir members. Richard Swain and Mrs. McLean were pianist and organist for the service, which brought back many fond memories of the past. 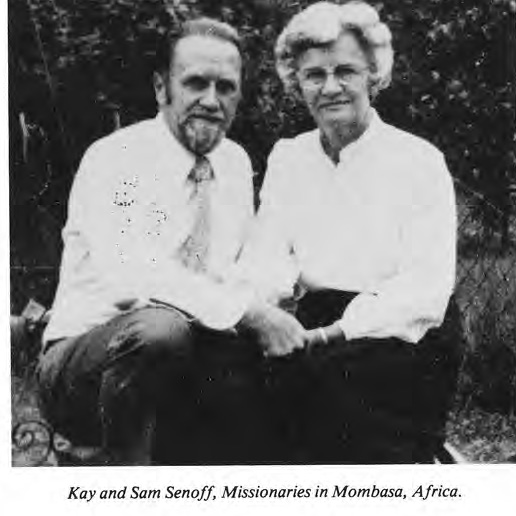 A new organ was purchased and dedicated to the memory of Kathrine Kreviazuk, a lifetime member in 1972.

A new piano was also purchased for the Church in 1981.

Today services continue to be held on alternate Sundays with St. Andrews Church in Kirkness.

May McKenzie Church continue to be a lighthouse in this area for the Glory of God until Jesus comes.

The student Ministers usually served 3 months to 3 years and most became ordained preachers of the Presbyterian Church of Canada. They are now serving in various parts of Canada, at home and abroad.

By: Steve and Rose Rapko

Posted in Places of Worship, Presbyterian.