The year 2000 marks the seventieth anniversary of Mackenzie Presbyterian Church. Construction of the light wood frame building was completed in 1930. The Church was built by a Winnipeg construction company on its present property, slightly north of where it currently stands. A new foundation was poured and the Church was moved about 25 years ago.2 The site of Mackenzie church is Lot # 120 Henderson Hwy, Parish of St. Clements. Title number 1270865. Trustees; Elizabeth Fidler, John Zelych, and Ed Huck 3. 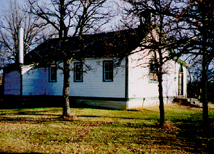 The name originally given to this church was “All People’s Mission.” 4 The name was later changed to Mackenzie in remembrance of and dedication to Mary Mackenzie, founder of the mission. The present land beneath Mackenzie Church was donated by Mary Mackenzie and financial support for church construction was partly given by the Women’s Missionary Society.

In 1930, by the help of our Women’s Missionary Society and a few interested friends, a fine church building was erected on her property at Gonor. It contains a bell in the belfry donated by the women of Knox-Crescent Church, Montreal, and a stained glass window of equal value bespeaks the good will of the Synodical Missionary, Rev. W.M. MacKay, and the Sunday School scholars. 5

The church was used for Sunday worship, Sunday school classes, marriages, baptismal and burials. Mackenzie Presbyterian church was a missionary church, therefore it was not self-supporting. The years of active congregation experienced diverse and numerous individuals partaking in leadership roles. They include: Ordained Ministers, Student Workers, Deaconesses and Lay People. The church held active services from 1930 to the early 1980s.6 In the later years alternate services were held between Mackenzie and St. Andrews Church in Kirkness.7 Mackenzie Presbyterian church has not be used for active services since the early years of 1980.

Posted in Places of Worship, Presbyterian.