Born about 1824 in his parents’ camp along the banks of Netley Creek, Miskoo-kenew (Red Eagle) 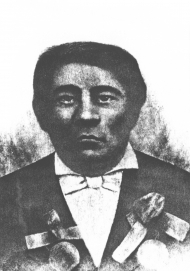 was one of the younger sons of Peguis and one of his wives. He was cultured in the traditional ways of his Saulteaux ancestors and educated in Christian/European traditions at the mission school at St. Peter’s. He was baptized, Henry Prince in 1837.

Henry became Chief of the St. Peter’s Band/Reserve after the death of his father, Peguis. In that position, he represented the Band when he signed Treaty One at Lower Fort Garry in August, 1871. Henry Prince died on 7 June 1899 at the age of 75. He was buried the following day in St. Peter’s cemetery. His grave is unmarked.