Developed on the banks of Gunn’s Creek, Gunn’s mill was a local center of industry and commerce. Built by John Gunn, this mill, even after being continuously thwarted by major setbacks, managed to create large amounts of produce for all citizens within the area. Not only was it foremost in the communities’ business enterprise, it was also a location of social information for local farmers, making this building a focal point in the history of the present day Lockport community.

The Gunn family was a very well respected and influential family in the St. Clements/St. Andrews communities. John Gunn was the son of the Honourable Donald Gunn, an employee of the Hudson’s Bay Company, and Mrs. Margaret Gunn, formerly of the Swain family. “After severing his connections with the honourable company, he [Donald Gun] purchased a homestead on the east side of the Red River” (slh 568). Donald Gunn had a total of 12 children; John was the third, born in 1827.

It was John Gunn who was the creator of Gunn’s Mill. John Gunn married Miss Emma Garrioch in 1855. Throughout

his life, John was also an active politician. “He was a returned Member of the Local Legislative for St. Andrews North at the 1874 election and the one following. [He was also known to be] a staunch opponent of liquor traffic” (slh 569). John Gunn died on September 10, 1898, at 71 years of age.

One of the major accomplishments of John Gunn’s life was the mill which he began operating in the early 1850s. Although John had little financial support to invest in this operation, he had “an abundance of health and strength, unconquerable optimism and the will to succeed” (Gunn 319). The few assets he possessed included the original homestead, lot 163, in the Parish of St. Andrews on the east side of the river. According to previous municipal boundaries, in 1859 the Parish of St. Andrews was located on both sides of the Red River. However, by 1880 this plot of land was located in the St. Clements electoral boundary, and by 1883 in the St. Clements’ municipal boundary. 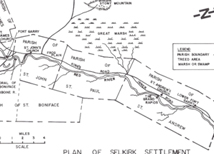 Today this location includes the eastern section of the St. Andrews Lock and Dam. Through this lot ran a small stream known as Gunn’s Creek. Although it is viewed as a peaceful creek today, kept constant from the leveled control of the Lockport Dam, Gunn’s Creek had the ability to “go on periodic rampages that attracted the attention of even the dullest observer [… as] it galloped down its tortuous, pebbly channel, in the spring of the year or during rainy seasons” (Gunn 319).

John Gunn took special note of this creek’s abnormal behavior and considered the possibility of harnessing its irregular and intermittent power. With an increase in settlement, abundant crops of grain were being harvested. Hence Gunn’s decision to build a watermill which could grind the supplies of grain into much needed flour.

When investigating the most suitable location along the creek, John Gunn decided to locate the mill further down stream, on his newly purchased lot 167, near the creek’s junction with the Red River. Almost all materials needed for construction could be found on the local landscape. Many workers were hired to complete the construction of the mill. They were paid as little as 25 cents per day, for an ordinary labourer, and 45-50 cents per day for the skilled workers. 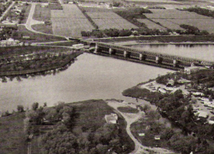 The primary tasks involved constructing a dam is to maintain the water levels. Most of the work was completed in the summer months when the creek bed became dry after the spring floods.

“The dam was first constructed as a wall, or dyke, of limestone [… and was later] reinforced by a heavy, sloped bank of clay, well packed in on either side” (Gunn 319).

The limestone for the dam was quarried from the riverbank. The dam was then “pierced, at equal intervals along its length, by three spillways about five feet wide, constructed of heavy oak posts and planking, and controlled by strong oaken gates, with oaken levers for raising and lowering them” (Gunn 319-320). These levers, only about the size of a fence post, were accessible at the top of the dam to control the water levels. 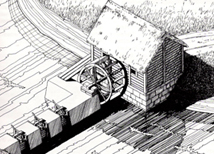 The actual mill building measured 24 x 34 feet, and had a thatch roof. At two stories high, the second floor was just above the height of the dam. With approximately eight feet separating the dam from the building, a planked bridge was created in-between.

The flour was then bagged and delivered. There were no glazed windows on the mill. The light needed for work came through the open door and unchinked logs. The lack of plaster and chinking on the walls resulted from continuous vibration from the grinding wheels. If grinding at night was necessary, fish-oil lamps were used. 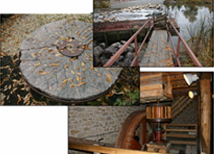 “With the exception of a few small metal gear wheels, brought by Mississippi Steamer and Red River Cart from St. Louis, Missouri and some brass bolting cloth from England, every wheel and spindle and every other working part [of the mill machinery] was manufactured from local materials by local artisans” (Gunn 320).

Self-trained wheelwright and joiner, John Gunn, made many of the wheels out of native oak. The water wheel, which harnessed the power, measured 16 feet in diameter. There was a sequence of corresponding gears leading into the lower level of the mill which would move the stone wheels grinding the flour on the top floor.

The millstones were cut from native granite, located on the east side of Lake Winnipeg, opposite of Grindstone Point. These massive stones measured five feet in diameter, were eight inches thick, and had to be transported by York Boat to the site of the mill.

Although there were two sets of stones, only one operated at a time. The first and only attempt at operating both simultaneously almost ended in disaster. It was described as if “a young earthquake had broken loose. The plaster and chinking of the log walls came down in showers and the entire plant was threatened with destruction” (Gunn 320). After this incident only one set was used.

By the end of March the mill was ready for operation. However, additional setbacks occurred in the first few operations. During the first spring thaw, with a heavier winter snowfall than normal, the amounts of spring runoff rushing down Gunn’s Creek endangered the entire mill operation. The dam originally only had one spillway. The force of the water flowing down the creek created leaks all over the dam, which was in danger of collapsing completely. Volunteers and working men “with barrows and shovels were quickly mustered and put to work, some wrestling with the leaks in the dam, others cutting a ditch around it to let the surplus water away” (Gunn 321). The project was saved, and over time a second spillway was developed.

Regardless of the initial setbacks, the mill proved to be an unqualified success. Locals from all over the community would bring their grists to the mill. Even the York Boat brigades of the Hudson’s Bay Company would bring hundreds of bushels. The demand became so great that the mill could not always keep up with the orders; the unsteady water was considered a problem. To maximize efficiency, during flood season, the mill operated day and night. Payment for the services of the mill came either by moulter, which was taking a percentage each bushel of wheat, or by pound notes and gold sovereigns from the wealthy and the Hudson’s Bay Company. 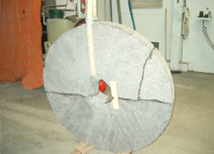 Its era came to an end in the 1870s, with the introduction of the new steam flour mills. “With improved machinery and methods, the patronage of the “old mill” naturally fell off, making its continued operation unprofitable” (Gunn 321). It was then closed down and dismantled a few years later.

Today, the historic ties between Gunn’s Mill and agriculture in the northern Red River community run deep. The St. Clements Heritage Advisory Committee has discovered and restored one of the old millstones used in Gunn’s Mill. This wheel will be displayed with a corresponding plaque on the site of the old mill. Currently this location includes the grounds of the newly constructed River Creek Estates apartment complexe