The history of Happy Thought School began on April 7, 1908, when the East Selkirk School District No.99 dissolved after “a few years of discontent in the area” (Goodman, 241). Auditor of St. Clements and fifth generation lawyer, Alexander Butler Rowley, is responsible for providing Happy Thought School with its unique name. Mr. Rowley was “instrumental in solving many . . . disputes, because of his orderly, legal mind” (Goodman, 241). He “stressed that education should be one of the happiest thoughts, as was the new building to educate our children in. The dispute in the village had been long and bitter and should end on a happy thought” (Goodman, 241).

The original East Selkirk school house, a wooden structure with four rooms, had been used for more than 35 years – the last nine as Happy Thought School. At this time, HTS included students from K – 12. In 1910, according to the municipal history collection East Side of the Red, the school operated on a budget of only $1 000.00. In 1916, the Department of Education ruled the building “unfit for school purposes” (Goodman, 242). Subsequently, plans for a new school became necessary.

A four room stone school house was built the next year, and formally opened on Feb. 5, 1917. The building was designed by a Winnipeg architect, Mr. Harry W. Green. It was built with stone from the old East Selkirk “Round House”, and was two stories high, with a basement which was to be divided into playrooms. The school cost $10 300.00 to construct. Interestingly, some believe this school was built on the site of an Indian burial ground, as four graves were apparently uncovered during excavation (Goodman, 243). 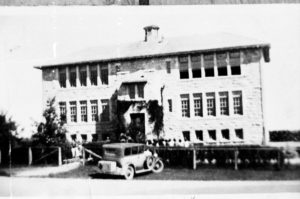 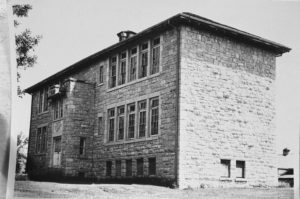 To keep up with the fast growing community, the district continued to upgrade. Outbuildings were constructed to accommodate the growing student population. On Oct. 1, 1927 another two–room school house was authorized, as well as a new heating system in the main stone school. The school grounds were expanded in the 1950s, closing portions of Church road (Goodman, 244). By the 1960’s, so many of the small, rural, one-room school houses were asking to be consolidated that the district formed plans to build one central school in East Selkirk, eventually removing all other school buildings (Goodman, 245). 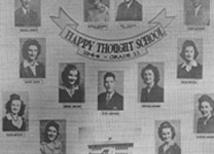 Architect Peter Langes designed the present HTS building. This building is two stories with a partial basement (Local Government Boundaries Commission Manitoba). The total cost of the project was $370 000.00, and the school was formally opened in January 1967 (Goodman, 246). Students from all corners of the Happy Thought District were to be transported to the school by bus (Goodman, 245). About three months later, on April 1, 1967, Happy Thought Consolidated S.D. No.1452 became part of the present Lord Selkirk School Division No.11 (Goodman, 241). 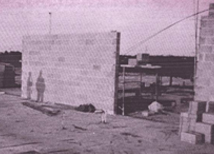 A survey done by the Local Government Boundaries Commission of Manitoba shows that in March 1968, there were only 17 teachers in the school (including the principal) as well as two custodians. Originally, there was one gym (the present “big gym”) and one small Library which was also used for Visual Communication and Music. At that time the school population was only around 400 students. Since then, according to the Building Valuation Schedule: Lord Selkirk School Division, there have been two major additions. The addition of 1972 included 34 440 square feet, and the smaller addition in 1991 was 7 816 square feet. According to Mr. Kristalovich, HTS principal from 1992 – 1999, the second addition was composed of the music/science/band wing and the small gym. More recently, there have been upwards of eight portable classrooms added to the school. All of these improvements came as a result of the growing student population, now consisting of K – 9 students. Once the student population reached 700, there was a pressing need for more class space.

For many years, school division officials have been planning to build a second middle-years school. Recently, even after many setbacks and revisions, construction began. According to Mr. McLaren, “The project is going very well at this point in time”. They are hoping to open the school September 2007. The building will be 59 500 square feet, and cost a total of $9.5 million (Buck, Thinking Happy Thoughts). Everyone in the area is very excited for the opening of East Selkirk Middle school which should provide students with more activities than ever before. “Some of these new features include: a Home Economics lab as well as Technical Communication facilities, robotics lab, and new life skills class” (McLaren). 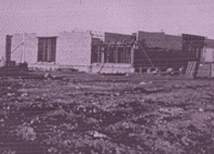 Happy Thought School has a great level of community involvement, which is one of the reasons that Mr. Hummelt and Mr. Mclaren immensely enjoy their jobs as H.T.S. principals. The parent support is unbelievable. They have both said that this is the most outstanding aspect of the school. Parents are always very involved with things like “fundraising, concerts, the Ukrainian program, Playground Committee and Band Parents Committee” (McLaren). According to Mr. Hummelt, the community as a whole hasn’t changed much over the years, since he attended as a student.
Happy Thought School offers many programs and extra curricular activities. The students are involved in intramural or team sports including volleyball, basketball, badminton and track. Every year it has become a tradition for a student versus teacher play-off in a hockey game at the East Selkirk Arena. There are also various clubs and committees in which students have the opportunity to get involved, such as Discovery Time, Green Team, Chess Club, Yearbook and Farewell (www.Issd.ca/hts). As well, many students enjoy the new Hockey Canada Skills Academy (HCSA) and the unique Ukrainian Immersion program (www.Issd.ca/hts). This school’s band program starts at grade five; the band often goes to festivals to compete with other schools. 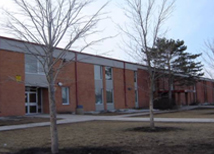 This year the Ukrainian program at Happy Thought School, started in 1982, will be celebrating its 25th anniversary. Originally the program was for grades one to six, but in 1995 it was expanded to include kindergarten to grade six students. In 2003 they attempted to offer the program for grades seven to nine, however, it was only workable for the grade nine classes because it interfered with many of the core subjects. The next year they were able to implement the program for junior high students. Some of the highlights of being part of the Ukrainian program for student Kiersten Knysh included the Christmas tea and concert, making pysanky (traditional Easter eggs), putting together Easter baskets, and learning to cross stitch. Great cultural experiences are available for all students integrated in this program, as well as the opportunity to become well versed in the Ukrainian language.

The Playground Committee was started in 1981. This committee is made up of “parents, teachers and school administrator(s)” (Goodman, 250). Presently, it is still functioning with the same goals. They “assist in the provision of adequate outlets for outdoor physical activities on the school property” (Goodman, 250). According to H.T.S. principal, Bruce McLaren, the committee raised $250 000 to build the new play structure in 2003. “It is newer, better looking, there is more for them [the students] to do, and a lot safer” says Kiersten Knysh, a grade five student at H.T.S. The committee is currently raising money for the playground of the new East Selkirk Middle School. Mr. McLaren also mentioned that the new playground may include a “space net,” a climbing structure very different from anything on the present playground, and a 1 ½ mile-long fitness trail with stations every 50m. 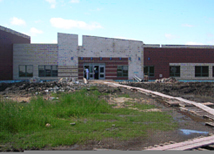 Currently the East Selkirk Middle School is under construction and, when completed, will house the previous students of Happy Thought including grades 5 – 9. This new school, including 59 500 square feet, is estimated at a total cost of 9.5 million dollars. Aside from the basic classrooms this new school will include a home economics lab, technical communications, robotics lab, and life skills class. This school became operational in fall of the 2007/2008 school year.

The community, along with the numerous students of the school, will benefit greatly from these improvements in the future. Along with its rich history, Happy Thought School is, and will continue to be, a treasured landmark for many years to come.