Mr. Arthur Doidge learned his trade of Pottery in Peterborough, Ont. He came to Manitoba and settled in East Selkirk in the 1870’s. He built for himself a business in East Selkirk called the “Doidge’s Pottery Works” and his large plant was situated about 150 yards south of where the old CPR Right-of-Way crossed Cooks Creek. There were several brick plants in the area west of Cooks Creek leading to the Red River, but this pottery business was operated independent of any of the other manufacturers of stone or brick. It became “Doidge and Doidge” when his brother joined him in the management and operation of the plant. 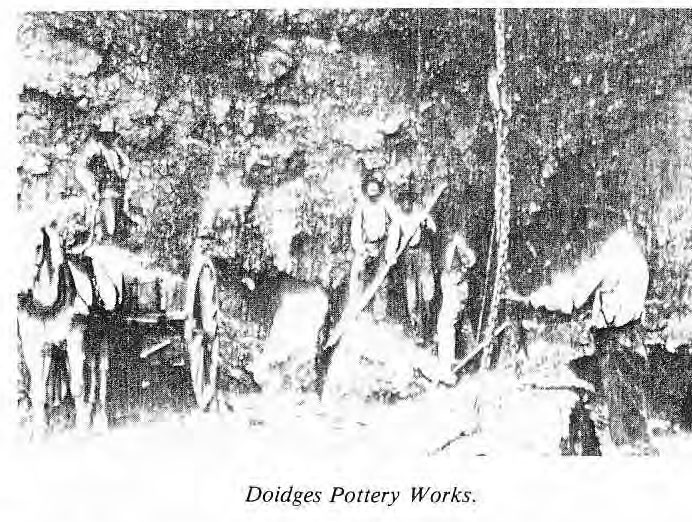 The product at the beginning was coarse items such as. flower pots and sewer-pipe type of commercial enterprise.

In the year 1889 a Mr. Richard Kingdom came to Manitoba and commenced working with Arthur Doidge of East Selkirk and they created the firm of “Doidge and Kingdon of East Selkirk. ”

Richard and Arthur had both learned the pottery trade together, many years earlier, in Ontario. Arthur had come to Manitoba to set up his business in East Selkirk while Richard had spent the l8 years working at his trade in Wisconsin, New York and Texas.

However, in the year 1899 when the two gentlemen merged their knowledge of the pottery business, it became an improved enterprise.

During the fall of 1896 Doidge and Kingdon expanded their pottery works business and made several plant improvements and modernization. They then started manufacturing a line of stoneware that the newspapers reported were “more equal to the imported articles.”

However, as in all things, they had their ups and downs. Just as their product was becoming quite fashionable and popular, Richard Kingdon took ill. His illness was brief and his death unexpected, as he died in March 1897, before the ice was out of Cooks Creek.

Richard, during his stay, was very active in the Church and Sunday School and travelled to Selkirk where he enjoyed membership in several organizations such as the
Oddfellows and Masonic.

Arthur carried on with the pottery works, but missed his old friend. Eventually, in 1906, Arthur Doidge sold his property to a Mr. Michael Starodub who had moved out from Winnipeg that year. Mr. M. Starodub purchased Lots 48 and 49 containing l0 acres, within the village of East Selkirk.

Within a few weeks of the sale, Arthur Doidge moved to B.C. where it was reported he was involved in fruit farming on a fair scale in the Okanagan Valley.

Arthur was not really in good health when he retired from the pottery business, and in May of 1914, East Selkirk learned of his death in Summerland, B.C.

Arthur was Mayor of the Town of East Selkirk when it was really booming and all the brick plants and quarries Doidges Pottery Works. were at full production. He was involved with some of the construction of the Roundhouse. He was quite political and enjoyed a good debate on occasion.

When Arthur Doidge was Mayor of East Selkirk in 1887 it is to be noted that his brother, E. Doidge was a Councilor at the same time.