For over one hundred and forty years, the ferry system was one of the most common transportation methods in Manitoba. In St. Clements, the ferry system was crucial in the everyday activities of its citizens, particularly for maintaining communication and flow of goods and services between West and East Selkirk. These raft-resembling crafts were located at numerous sites along the St. Clements municipal boundary, the Red River, moving people, goods, vehicles, and animals to the other side.

The major function or advantage of a ferry was its ability to transport heavier items, such as horse drawn wagons or herds of livestock. The ferry provided a link between local roads and highways which were divided by rivers that were impossible to ford. By allowing passage across the rivers, access to services such as the local post office, school, and church was readily available. The local residents using the ferry could, by paying a small fee of about 15-25 cents, deliver livestock, produce, and grain to the railroad or market without having to travel a great distance to a fording site. 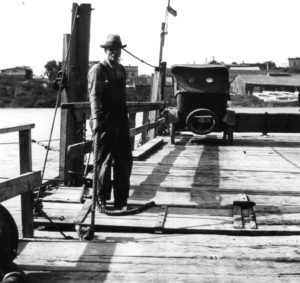 The creation of this travel connection also helped increase settlement in the area, and was very significant to the municipality, with many local events dating to its establishment or destruction.

The first and most primitive ferries had long paddles or poles; however, as the rafts became larger, this form became impractical because it required too much manpower. The second and most common method of powering a ferry was by using a cable which was connected to both sides of the river. The ferryman pulled the raft across the river along the cable, using a winch-type machine. When a ship came along the river, the cable would then be dropped low into the water to allow passage. By the time the municipalities began to run their own ferries, some steam-powered ferry systems had come into existence, although it was rarely used in this municipality.

It was common for the local handyman and volunteers to build the ferry. Supplies were purchased with the $200 government grant, but some municipalities later raised extra money to buy ready-built ferries from major steel and engine companies. The platform for the ferries usually comprised of keel joists overlaid with several 4 x 8 foot wooden planks placed in parallel sequences. Guardrails were also placed on the edges of the platform to prevent people, goods, and vehicles from falling overboard. Aprons were attached to the base platform; they were wooden planks reinforced from underneath with metal hinges to raise or drop the planks on to the muddy banks for easy loading and unloading. They also acted as guard rails on either end of the ferry.

Many geographical factors had to be considered when a ferry was proposed for an area. The elevation and slope of the bank on each side of the river was the most crucial. The ferry could not be placed in a low-lying area, since the docking areas might flood; nor could a ferry dock against a steep cliff-like ridge. The current strength and expanse of the river also had to be factored into the calculations and, as a result, it took a great deal of exploration to find suitable locations. If a ferry were to cross at a major settlement, such as between Selkirk and East Selkirk, then the local docks could also be used for the docking of the ferry.

Although it was common to transport many types of goods and services by the local ferry, service was often haphazard and dangerous. Mechanical failure, sinking, high water conditions, and ice forming/breaking were some of the major hindrances to a cable ferry. During the spring and fall, when ice flow was dangerous, there were times in which the ferry tipped over, dumping cars, horses, and people into the river. Sometimes, when the ferry capsized, passengers or horses drowned. 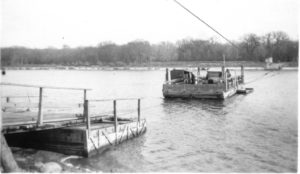 Even though it was often dangerous, the ferryman’s job was quite interesting. The operator, along with the ferry site, was the major news source for local gossip. The ferryman also kept a dog for companionship, since he rarely married. Not only was the ferry a place for local information, it had many other uses that were not originally expected. At times the ferry deck could be swept off for a dance floor for local festivities; political signs and advertisements were also frequently placed on the ferry sites where numerous town citizens could see them.

There are only a few published records of specific ferries in the St. Clements area, most references being part of oral history. One of such records was about the largest ferry in St Clements connecting East Selkirk and West Selkirk at MacLean avenue. Although both sides of the river were fairly developed near Selkirk/East Selkirk, with their own general store at the time, the major reasons to cross the river were to go to church, or to take cattle and goods to be sold. The East Selkirk/Selkirk ferry was located at the foot of McLean Avenue in the town of Selkirk.

Mr. Holdgate was the manager of the ferry and after operating it for numerous years, it was recorded on April 12 1889, that “Mr. George Holdgate, with his unusual enterprise, has devised a novel idea in making quick trips over the river by ferry. He now propels the craft by means of a rope attached to an ox, making the trip in two minutes” (Hooker 56). One of the most notable transportation projects involved the ferrying of Mr. Holdgate’s personal house to Eveline Street. By March 1917, a new ferry was put in use. This ferry was used until the construction of the Selkirk Bridge in 1937. It was also interesting to note that while financial arguments were occurring over whether to develop Selkirk’s bridge into a toll bridge, the ferry remained operational to transfer citizens across.

There were also multiple ferries placed along the Red River towards the north; one was located at the base of Fuller Road, East Selkirk, another crossing Netley Creek, and yet another was situated further north towards the mouth of Lake Winnipeg. The northern ferries were vital to the everyday activities of the residents; however, many of these ferries closed down with the creation of the Selkirk Bridge.

There were also many ferries situated south of Selkirk/East Selkirk. The Mapleton ferry was primarily established due to the location of the St. Clements church, and the Mapleton school. A large number of parishioners lived on each side of the river and transporting across the river by canoe became increasingly difficult. By 1896, there were thirty children attending Mapleton’s school, and it was a daily hazard for them to cross the river every day. In September 1896, the Rural Municipality of St. Clements and the Rural Municipality of St. Andrews each agreed to pay half of the cost of a ferry across the Red. The ferry ran from property donated by Thomas Bunn to the foot of Pruden Avenue. This ferry was used constantly until the creation of the Lockport Bridge in 1909. The old cable remained in place as late as 1936.

From 1895 to 1945 there was a steady decline in the use of the ferries, and by the 1940s and 1950s the use of a ferry was almost obsolete. There were many factors attributed to the decline of this system, the first and foremost being the improvement of bridge-building techniques. The strong, sturdy bridges over the rapidly moving rivers created higher standards of transportation. As cars replaced horses, the increasing use of automobiles also created a great demand for proper roadways with proper river crossings – bridges were the only way to match this demand.

“Both Bukovynian and Galician farmyard structures – barns, granaries, chicken coops, work sheds and storage sheds – were constructed, like their dwellings, on a rectangular plan with mud-plastered log walls and thatched roofs” (Butterfield 79). In addition to the farming settlements, churches in the region were also elaborately constructed, reflecting original European design.