The St. Andrew’s Lock and Dam is most commonly known for its unique structure. Its adapted French design was used to work with the environment, instead of attempting to control the forces of nature. The creation of the dam increased trade access along the Red River from North to South by raising the water level around major upstream rapids, which prevented boat traffic into the Winnipeg markets. This dam was a genuine accomplishment in Canada’s architecture and was the first of its type to be constructed in North America.

Located on the Red River between the city of Winnipeg and Lake Winnipeg, the Lister Rapids were an immense obstacle in the region. Even since the beginning of the fur trade, these rapids, although picturesque, have blocked river access from Northern to Southern Manitoba. This barrier separated the province into two distinct trading regions, only allowing an insignificant amount of trade to occur by oxcart or canoe, as larger vessels and even York boats could not cross the rapids. Major commodities such as lumber and fish were unloaded and transported by road, which was costly. It was considered impossible and complete suicide to attempt to pass this torrent of water, measuring a 15-foot drop across a 10-mile distance. However, with the increase in trade by the revolutionary steamship, access to both Northern and Southern Manitoba was considered essential, and ideas were forming about how to pass the impassable.

In the late 1800’s, surveyors were sent to determine what the best possible options were to overcome the obstacles in the river. The major suggestions that were presented were to either blast a channel through the rapids, forcing nature to change, or to build a dam and work with the ecosystem. In 1896, after failed attempts to dredge the rapids, it was concluded that a dam would be built three miles north of the St. Andrews Rapids, at what is now called Lockport. Here they would be able to harness and regulate the water levels, facilitating trade over the rapids. In 1899 the estimated cost of the project totaled $150,000, and was labeled as “an improvement of the St. Andrews Rapids.” It was unknown at the time how large of a project that they were actually beginning.

The Lockport site was chosen because it was considered ideal for two main reasons. Primarily, there was a long bend in the river at this location. This made it possible to cut a channel through the land adjacent to the dam, in which a lock could be built so that ships could by-pass the dam. Secondly, there was a natural fault in the rock strata. Because of this, the ground level was higher, giving easy access to the bedrock below for their footings.

A large amount of thought and foresight went into planning the Lockport dam. The proposed project involved an uncommon, and rarely seen, movable dam, which could raise its floodgates at any time. This was chosen for many reasons. Mainly, a permanent structure had the potential to cause an ice jam during the spring thaw, which would cause immense flooding upstream. A movable dam would have the ability to open its many gates with very short notice, in as little as a couple of hours. Atmospheric and wind pressure on Lake Winnipeg also had the ability to raise or lower the Red River by as much as 8 feet, creating a tidal type river, which would be difficult to control. This could be harnessed by the movable dam style. When considering all of these factors, they decided to use the Camere design. The prototype for this style of dam could only be found in one other place around the world, on the Seine River, a tidal river, in France. The Camere design was a fixed structure of concrete or stonework/brickwork with a series of steel truss bridges resting on piers. From these piers a number of frames operated, by containing roll off curtains of wooden lathers. A couple alterations were made on the original design, making this dam unique to the world. The final structure would reach a proposed height of 21 feet, creating an elevation of nine feet of water on the southern side of the dam to allow passage over the rapids.
The task began in January 1900, when men began removing boulders and cutting an 8 feet wide opening across the river through

the ice. By March there were upwards of 35 men working on this preliminary task.

The resident supervising engineer was Mr. A.R. Dufresne. Mr. A. St. Laurent and Mr. H. Vautelet were the design engineers on the project. Construction of the dam involved a great deal of manual labour; mainly it was men with picks, shovels and wheelbarrows, and the use of horse teams drawing scrapers, dump wagons, and slushers. Labourers were paid as little as 15 cents an hour for unskilled workers, 25 cents for skilled, and $2.50 per team for a 12 hour day. 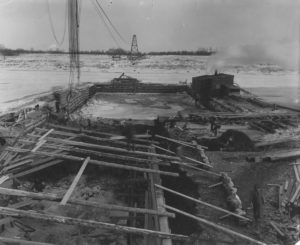 The first sod was officially turned for the Locks on Monday afternoon of October 8, 1900, and the building process was not always easy. The workers endured many setbacks including outbreaks of typhoid and the loss of many workers to drowning in the unusually high water. Over the next few years, the project was continually thwarted by small failures but it persisted on. The completion of the project was scheduled for the start of the 1910 navigational season. The main bridge to accompany the dam was competed 1909. The lock at the west end of the dam measured 200 feet long and had a width of 45 feet, while providing a depth of nine feet of water over the mitre sill. It would accommodate vessels of about 1600 tons and had a maximum lift of 21 feet; the average regulated lift was 18 feet. The lock design was a very modern accomplishment with automatic self-balancing valves from which the lock could be filled and emptied. At the time, they were the largest lock valves of this type in the world. The total materials used for construction were 55,000 cu. yards of concrete and about 6,500,000 pounds of steel. The concrete work cost about $1,500,000 and the steel calculated about half this amount. When the main bridge, lock and dam were completed, the total cost came in at an astounding 3.5 million dollars. 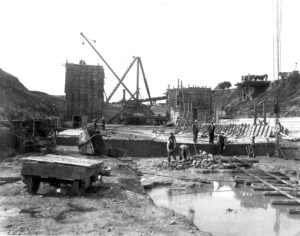 On July 14, 1910, ten years after the start of the project, Sir Wilfred Laurier officially declared the Locks open. This momentous event occurred with the steamer Winnitoba passing through the locks with approximately 3000 people on board, and an even larger crowd situated around the locks. By 1913, a bridge deck was completed allowing the movement of vehicles and pedestrians over the structure. A bascule lift, or drawbridge, was later installed over the lock structure to allow tall ships to pass through.

Over the years though, commercial shipping between Lake Winnipeg and the City of Winnipeg declined due to other lower cost of transportation by improved rail and road systems. Currently the primary use of the locks is for recreational and passenger vessels and to present day the dam still provides a stable water level for the river, as far upstream as the city of Winnipeg. 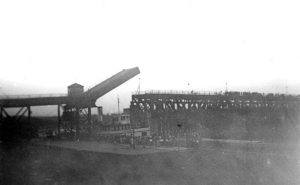