Exploring the “new world” was a task that few had the bravery to attempt. The French Canadians were some of the first foreign explorers to come to the land along the Red River and into current St. Clements. Led by Pierre La Vérendrye, they explored this fertile region in the first half of the 18th century. 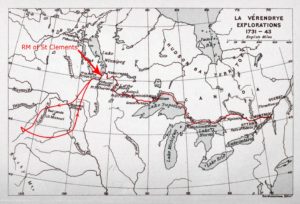 The explorations of La Vérendrye have been honoured in Manitoba with a trail system. It uses existing roads that closely follow the waterways he travelled. The La Vérendrye trail runs directly through the municipality of St. Clements, hugging the east side of the Red River. It includes most of St. Peter’s Road and many residents of this area are reminded of La Vérendrye’s travels by the familiar yellow trail sign.

Although these explorers never established a permanent settlement, they opened the possibility of future exploration into the area.

These explorers made many reports about the bountiful fur supplies that were present and the Hudson’s Bay Company was soon founded in hope to harness these valuable riches.

They immediately beganto trade on the coasts of Hudson’s Bay and James Bay. They later moved inland into Rupert’s Land, which included the all land area that contained rivers draining into Hudson’s Bay. The founding of this company brought many traders and explorers into current day Western Canada. All of them were hoping to make themselves wealthy beyond their wildest dreams.

The creation of the Hudson’s Bay Company helped begin the first permanent foreign settlement in the Red River area. The first settlements in the St. Clements area consisted of Hudson’s Bay Company employees who were trading with the aboriginal peoples. Many active and retired traders settled in the area just south of present day Selkirk/East Selkirk, in Lower St. Clements. This confirmed constant trade access to the aboriginal settlement, located just north of their community. With little difficulty, they solidified their homes and established their families.

Many European men married aboriginal women creating a new race of people. Those of English Isles descent were known as ‘mixed blood’ people, and often adopted their father’s religion, which was Anglican. These were the predominant people in the St. Clements area.  People of mixed French and aboriginal blood were known as Métis (meaning ‘mixed’) and were distinct from the mixed blood people in many ways, including the adoption of their father’s religion, which was Roman Catholic. Today we refer to both groups as Metis.The ‘mixed-blood’ cultural group became dominant in the region, spreading between present day Winnipeg to Selkirk.

The first settlers to arrive who were not related to the fur trade were Lord Selkirk’s settlers. These settlers were refugees from the Highlands of Scotland, who were evicted from their homes during the Clearances of the early 1800’s. In the early 1800’s, Scottish peasants were experiencing one of their most difficult times in history. With the introduction of sheep farming, there were many Highland and Lowland clearances. Clearances occurred when landlords “cleared” the peasants and their homes from their estates to make room for sheep fields, which were more profitable. They did not care about what would happen to these helpless peasants, only about the money that the sheep farm would create. This left many Scottish people with no home, let alone livelihood.

Thomas Douglas, a Scottish nobleman known as Lord Selkirk, the Fifth Earl of Selkirk, took pity on these displaced peasants and wanted to help them. He aided hundreds of highlanders in escaping the extreme difficulties in their homeland by organizing the transportation of these “Selkirk settlers” to Canada.  He took the first group to Belfast, Prince Edward Island in 1803 and a second group to Baldoon, Upper Canada in 1804.

Lord Selkirk showed much interest in Alexander Mackenzie’s exploration of current Western Canada. He decided that he would create his own settlement in the west with these suffering people. He gave them the chance for a better life that they could not have found in their homeland. Lord Selkirk convinced the Hudson’s Bay Company that an agricultural settlement in the Red River area would help greatly with the fur trade. In 1811,the HBC granted him 300,000 km 2 to establish a settlement.

In 1812, the first group of Selkirk settlers arrived. They settled north of the river junction in St. John’s parish and further north in the current Kildonan area.

Many years passed and slowly the population started to grow. Many homes were also built where the trade was most likely to occur. At this time, there were many Métis and aboriginal peoples located near present day Selkirk. Many quarrels happened between the Métis and Scottish immigrant groups. The Métis saw the land as their territory and did not agree with the HBC’s decision to allow these settlers to establish in this territory. Violence was frequent, and it was through these disputes that the savage Seven Oaks Massacre occurred. The Métis gained much land and control in the area; as a result, Lord Selkirk sent a small force to stop the disputes. This ended successfully for the settlers, overwhelming the Métis and allowing them to yet again colonize and live peacefully on the land.

Years passed and the children of the original settlers began to move north and westward. They were trying to escape the flood plains that their ancestors originally settled on, at the forks of the two rivers. Many arrived in the newly created parish of St. Clements, which was located just above Lower Fort Garry, a secured fur trading post. This land was not prone to flooding, and relocating also placed the settlers closer to trading with the aboriginal people, in current St. Clements.

In 1869 the Hudson’s Bay Company gave up control over Rupert’s Land to the Government of Canada. Immediately, the Red River area when into a form of depression. Because of the great decrease in trade, money was not present for purchasing goods. As a result, crops were not seeded and droughts and floods still plagued the region. Life was difficult for the next few years, but these strong people persisted through any disaster that faced them.

After a few years, the settlers in this area were able to create a small, semi-stable economy. A number of the Scottish descendants then moved to the current day Selkirk/East Selkirk area. The land did not flood at this destination, which made it very suitable for farming and settling. Here they established a settlement under the name of the leader that achieved them their freedom, Selkirk. This was the first major arrival of immigration into the Rural Municipality of St. Clements.

Originally the main site for the city was to be based on the east side of the river, where current day East Selkirk is located. Plans changed, however, with the formation of two colonies on each side of the river. West Selkirk was officially established in 1882, followed by East Selkirk in 1883. By 1884, East Selkirk included over 400 people, five general stores, four hotels, several quarries, brickyards, potteries, and a very busy harbour at Colville Landing. This was a very prosperous time in East Selkirk history. 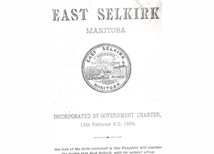 Eventually the settlement at this area led to the creation of the East Selkirk Roundhouse/Immigration Shed. This building was the main cause of immigration and settlement into the current St. Clements region. It helped establish many other oppressed immigrants, as Lord Selkirk had done once long ago.