St. Peter’s Church, Dynevor, is a distinctive monument not only in St. Clements, but in all of Canada. Built in 1853 in East Selkirk, Manitoba, it is one of the oldest stone churches on the prairies. The major significance of this historical building is not in its age or architecture, but in its location as the first true aboriginal agricultural settlement in Western Canada. It was through the devotion of Reverend William Cockran that this church was able to grow and convert many to the Anglican faith.

William Cockran arrived at the Red River settlement with his wife on October 14, 1825. He was a very impressive man in stature as well as character, measuring 7 feet tall and weighing approximately 300 pounds. He served as an assistant to David Jones at the Middle and Upper Churches in St. Paul’s and St. John’s parishes. When Jones left in 1829 to return to England, Cockran moved to the Lower Church at Grand Rapids which is now St. Andrews. When he was in this area, he noticed the bands of Salteaux and Swampy Cree First Nations that gathered at the area around Netley Creek, eleven miles down the river. 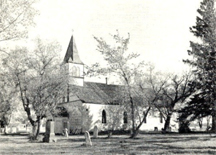 Because of increased settlement in the area, supplies of game and trapping were very poor and, as a result, the aboriginals who did not know any other way of life were starving. They pleaded for food from the settlers but did not receive any assistance. It was then that Cockran decided that something must be done. He saw the opportunity to evangelize them as well as improve their living conditions by encouraging them to adapt to farming as a way of providing food for their community. He also believed that if they were permanently settled and were cultivating the land, they would be easier to convert.
The initial response by the First Nations groups was outrage. They could not imagine abandoning the ways and customs of their people, and they had seen the damage that floods, droughts, and grasshoppers had done to crops of the new settlers over the years. The Hudson’s Bay Company also opposed the idea, as it would deter the trade that the company relied heavily upon. In October 1831, through all obstacles, Cockran was still able to obtain Governor Simpson’s reluctant consent to begin an experimental settlement at Netley Creek.

In 1832 Cockran was finally able to persuade a number of the First Nations people to establish this first agricultural settlement. It was Chief Peguis, the leader of the Salteaux, who led these people. At the age of sixty, Peguis had recently endured a severe winter and his people had come very close to starving. He had observed the benefits of farming life from the prosperous Selkirk settlement, located only a few miles to the south. During this year the first agricultural settlement was established at Sugar Point, near the current Selkirk Golf Course. Sadly, this task failed, as the land was like a swamp and many aboriginal people returned to their old way of life. Chief Peguis, determined to create a better way of life for his people, moved this settlement four miles down the Red River near Cook’s Creek. Seven original settlers located themselves here, and they found it to be much more suitable than the first location. By the following year, the settlement doubled in size and continued to increase. By 1834, a log schoolhouse was constructed for the settlement, and by 1835 a windmill was established. Cockran then decided that the residents were settled enough for the creation of a church. 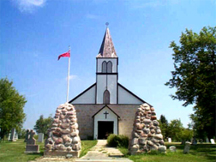 Cockran established the first and only Indian Church among the 17 parishes of the Red River settlement. The original St. Peter’s church was a wooden building painted white, measuring 54 feet by 24 feet, and was able to hold 300 people. It also had a cupola over the entrance and square-topped windows. It was officially opened on January 4, 1837.
After the creation of the church, the population of the settlement dramatically increased. In 1838, the population now totalled 239, and by 1849 there were 460 residents farming a total of 230 acres. There was still some difficulty with getting other aboriginal peoples to join the church, but they were steadily conforming. When Reverend Jones left for England, Cockran found the increasing tasks to be very challenging. The most difficult was having to feed these people in the winter season, as they would often give all of the summer harvest to their less profitable brothers. At this time, Chief Peguis wrote to the Church Missionary Society as the leader of this settlement and asked, “When we heard the Word of God we did not altogether like it; for it told us to leave off getting drunk, to leave off adultery, and to keep only one wife and to cast away our rattles, drums and our gods, and all our bad heathen ways…Mr. Jones is leaving us. Must we turn to our idols and gods again? Surely then our friends’ 300 souls is worthy of one praying master.” By September 1939, Reverend John Smithurst answered the petition and replaced Cockran. With this new leader, the settlement flourished. More and more first nation’s people were being evangelized, and the congregation increased to approximately 250 people. However, Smithurst soon felt the strain that Cockran felt, and he returned to England in 1851.

His replacement was Cockran yet again, who became even more active in his missionary work than before. The population of the settlement now totalled 500 people and he knew that the only way to meet their increasing needs was to build a new church. The Church Missionary Society held him in high regard and they granted the request to build this stone masterpiece. Some of the money was raised locally, with much donated from Bishop Anderson of the new Diocese of Rupert’s Land. The aboriginals of the settlement provided much of the labour. 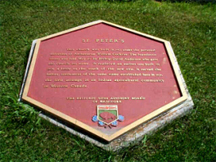 In the fall of 1852, eighty cords of stone were being quarried; the stonemasons worked all winter dressing stone for the corners, windows and doors. A foundation four feet deep and three and one half feet thick was laid by May. Bishop Anderson officially placed the cornerstone and assigned the name of the church to St. Peter on May 23, 1853. The final dimensions of the foundation measured 70 feet long and 40 feet wide. The walls were then erected using block and tackle with some stout boards, and mortar was made by burning lime in a kiln. 1,680 bushels of lime were obtained from the banks of the river. The glass for the windows was shipped from Britain in a most interesting way; the glass was placed in barrels of hot, thick molasses that hardened before shipping. When it arrived, the molasses was heated and removed. The work was very long and strenuous, involving 14-hour days, and Cockran had to work constantly as a motivator and supervisor to the aboriginal workers. The 24-foot long rafters were floated down the river, but by the end of July, workers, funds, and provisions were becoming scarce. The roof was placed on the church but was not finished until after winter, in 1857.
Cockran, after renewing the life in the St. Peters parish, left on another mission to begin a new settlement at Portage la Prairie. Cockran contributed more to the Anglican missionary on the Red River than any other individual. He was then replaced at St. Peters by Reverend Abraham Cowley. At this time missionary work began to decline, and in 1865 Chief Peguis died. As a result, the Christian and non-Christian Salteaux and Cree began disputing, and no one could find a common ground. Settlement in the district was expanding with a large amount of Canadian Settlers, many who were descendants of the Selkirk Settlers. In the 1860’s and 1870’s, aboriginal farms were bought out by the increasing white and Métis population and the settlement was now considered the Parish of St. Peter’s instead of an aboriginal settlement.

A treaty in 1871 designated St. Peter’s as a reserve to prolong the existence of the area, but by 1875, half of the population in the parish was non-treaty First Nations, and many of the aboriginals were selling out their land to the new settlers. In 1908, the Dominion Government closed the St. Peter’s Reserve, due to the lack of aboriginal residents. The remaining aboriginals sold their land and moved to the newly-opened Peguis reserve to the north. Because of the lack of support from the government, the church then helped support the aboriginal people as well as they could. An aboriginal hospital was established by the people in the church in 1896, with these Christians devoting their time and energy to maintaining this task.
As time passed, there were many additions made to the church. The stone wall located at the south end of the church yard was dismantled, and the materials were then used to build a chancel and a vestry. The original stone tower was dismantled in 1880, with a new bell tower reconstructed in 1904 in commemoration of St. Peter’s jubilee. Two bells hung in the tower until 1962—the larger weighing 141 ½ pounds, cast in the famous Whitechapel Foundry in London in 1850, and the smaller weighing 112 pounds, made in 1857.

St. Peter’s churchyard is now home to over 3,000 graves, the majority of which resulted from the epidemics which swept through the aboriginal peoples. Sadly, grass fires have destroyed most of the wooden crosses. Stone restoration work was completed as the years continued and to this day it is still used by the St. Peter’s congregation in the summer and is open to the public for special Christmas services in the winter. The pulpit, altar, and hand-hewn pews are the original items used during the missionary period. This church was very significant as it was the first attempt by the Cree and Salteaux First Nations to adapt to the changing society. The church will forever remain a famous historical site.

Posted in Anglican, Places of Worship.