Peguis was born in about 1774 near Sault Ste. Marie (Ontario) to a Saulteaux (Ojibway) mother, and a French fur trader 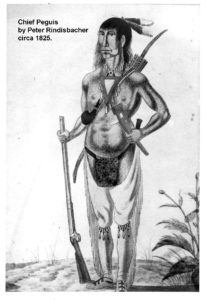 (coureur des bois/voyageur). His family moved west to Red Lake (Minnesota) before migrating northward on Red River to where it meets the Assiniboine River (current city of Winnipeg, Manitoba). Continuing north, they settled their main camp on the banks of Netley Creek.

The spiritual tradition of Peguis, and his people, was a form of Paganism – an earth based spiritual practice that taught the connectedness of all things in the ecosystem and the universe. All things in Nature have a spirit, including the sun, moon, stars, water, wind, trees, plants, lightning, thunder, and all animals. They believed in an all-powerful Creator/God, and referred to that Creator/God in their own language. When the Saulteaux peoples wanted to send their prayers to their Creator/God, they smoked the sacred pipe. When they needed to connect with that higher power, they played the sacred drum, offered tobacco, and performed sacred ceremonies.

In Peguis’ time, it was customary for Saulteaux men to have more than one wife. Peguis had at least two wives. Their indigenous names are not known. When Peguis accepted Christianity in 1838, he was given the name William King. One of his wives also accepted Christianity and was given the name Victoria King. Their children took the surname Prince.

Peguis was a part of the plans to build St. Peter’s Church. Ten years after the church was complete, he died at the grand old age of ninety. He was buried in the cemetery on September 28th, 1864, three days after his death.

Link to Wikipedia “Ojibwe” at: http://en.wikipedia.org/wiki/Ojibwe