The Province of Manitoba passed legislation to allow the formation of the R.M of St. Clements on 7 July 1883. The legislation was proclaimed as law on 16 November 1883 and deemed effective by 22 December 1883. The original boundaries included:

Portions of the County of Lisgar, from the Red River to the line between Ranges 8 and 9, East, on the east, in Townships 13 to 18, both inclusive, whole or fractional with those portions of the parishes of St. Peters, St. Andrews, and St. Clements, and the Native Reserve lying east of the Red River, and Townships 19 and 20, Ranges 7 and 8 East fractional, east of Lake Winnipeg. The Town of East Selkirk was absorbed into the Municipality of St. Clements in 1904.

The newly formed municipality held its first election of officers in early January 1884. Robert Hay was elected as Reeve, with Louis Vandal and R. McDonald elected as councilors for Ward 1. Councilors for Ward 2 included A. McDonald and John Clouston. Claude R. Macfie and Robert Cowan were elected for Ward 3. John Gunn became the first secretary-treasurer and A. J. Murray became the first clerk. Bylaw No. 1 “to regulate proceeding of Council,” passed on 15 January 1884. Council meeting were to be held on the first Saturday of each month.Long before the formation of St. Clements municipality the region was part of Rupert’s Land. A name given by King Charles II of England when he established the Hudson’s Bay Company on 2 May 1670 at Whitehall Palace in London, England. Under the original name of “The Governor and Company of Adventurers,” the Hudson’s Bay Company began its trade operations on the shores of Hudson Bay. It took possession of the lands through a Royal Charter, authorized by King Charles II of England at which time he declared his cousin, Prince Rupert of Rhine, as the company’s first Governor in addition to several of the wealthiest and influential men in England as original founders. The Charter declared them all as being “true and absolute Lordes and Proprietors of Rupert’s Land,” which equaled a massive tract of land currently understood to be the Hudson Bay watershed ~ approximately forty percent of modern Canada. St. Clements was among this tract of land.
The Hudson’s Bay Company merged with the North West Company in 1821. At that time Rupert’s Land was divided into four districts called Departments. Each Department had it own Governor and Council. St. Clements laid within the Northern Department, called the District of Assiniboia. At this time the District of Assiniboia was divided in four judicial districts. Local men made up the Council, and General Courts were established to deal with both civil and criminal cases. In 1809 Thomas Douglas, Fifth Earl of Selkirk, purchased approximately 300,000 square kilometers of land in the regions of the Red and Assiniboine Rivers where he established a settlement for his impoverished Scottish Highlanders. St. Clements was part of the northern tip of that tract of land. Lord Selkirk died in 1820. In 1835 his heirs resold all unsold lands back to the Hudson’s Bay Company. 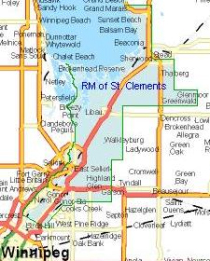 With the arrival of Selkirk’s first settlers, lands in Red River Settlement became privately owned. As the Red River Settlement grew several Hudson’s Bay Company retirees came to the settlement from the north with their families and resided on lots along the Red and Assiniboine Rivers. The size of a retiree lot was based on his rank within the company. The size of land grants varied between 25 acres and two hundred acres. Land grants always had river access and were consistently two miles deep. The river frontage was measured in chains – one chain equaled sixty-six feet. River frontages could vary from one and a half chains to twelve chains. The River lots pushed north from the original settlement all the way to St. Clements municipality.St. Clements formed a pre confederation parish in 1861. Under the parish unit of administration, St. Clements fell under the provisional government of Louis Riel in 1869. Thomas Bunn represented the region of St. Clements in that administration. When Manitoba incorporated into the Dominion of Canada in 1870, the newly formed province held its first legislative assembly with, Thomas Bunn, acting as the MLA for the region.

In 1873 legislation passed that allowed communities to form on a township or parish bases. Then in 1875 to 1877, the county system of local government came to the province. St. Clements fell under the County Lisgar. The county system caused many difficulties and was reorganized several times.

In February 1880, the province created municipal formations. St. Clements residents residing in County Lisgar became part of the first municipal county of St. Andrews. The boundaries were wide ranging. Parks Creek marked the south, the Big Marsh was on the west, and the border of the province marked the east and north boundaries. However, the borders were extended in 1818 and in 1912.

In 1883 local residents petitioned the provincial government to divide the county of Lisgar into two separate municipalities – St. Andrews would stay on the west side of Red River, and St. Clements would emerge on the east.

The town of East Selkirk remained an independent unit until 1904. In that year it became part of The Municipality of St. Clements.