After each meeting a lunch was served. This club was very industrious, and some of their social activities were: Pastry Sales and Sales of Homemade Articles. One very successful sale was held at the Happy Thought School on Jan. 29, 1954 and a well attended Talent concert was held at the hall on April 9, 1954.

The club had their own uniform colours. The first uniforms were of lime green blouses and black gathered skirts.

In 1957, Dorreen McBeath became the Home Economist for the Busy Fingers 4-H Sewing Club. The club was very busy with 4-H projects of sewing. They also held many raffles, whist drives, and Sales of Work to raise money.

ln 1959, Adeline Kisilewich was Secretary and Edna M. Craig became the Home Economist, for the Busy Fingers Sewing Club. ln this year alone, the club held two raffles, a whist drive, sales of work and a draw. They also served at a Church Dinner. By this time, the Club decided to change their uniform colors. 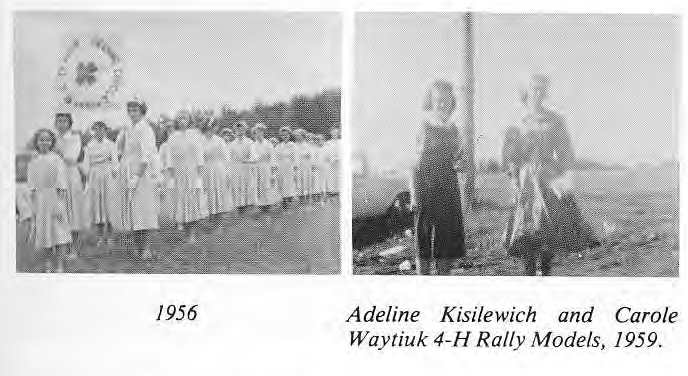 ln 1959, the Busy Fingers 4-H Sewing Club uniform was red blouses and pleated skirts, with a white background with a red rose border design. Many of the club members put on demonstrations and made public speeches. The girls designed and sewed their own uniforms which were much admired and were gala in appearance.

Apart from sewing, the members were involved in many healthy community projects that served to make them better prepared to accept their roles as helpful citizens within society. With the demonstrations, leadership duties, speech making and fund raising, each girl learned valuable experience that would serve them well in later years. 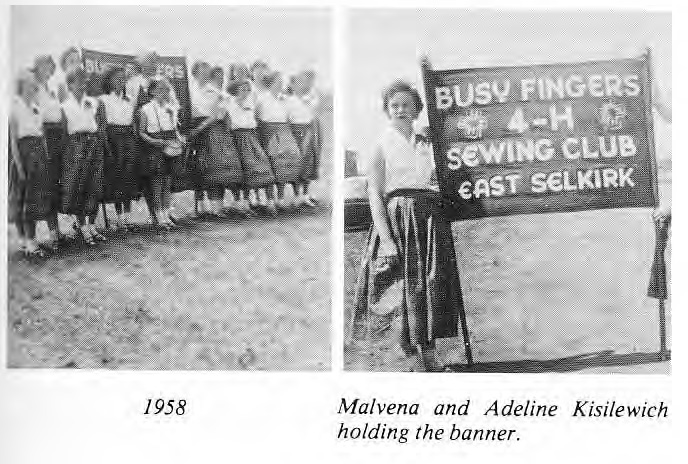 The Busy Fingers 4-H Sewing Club is fondly Maven and Adeline Kisile rich holding the banner. remembered by all as a very worthwhile and beneficial organization that was well supported and subscribed to by the community at large.

Eventually the club disbanded as the girls and members channeled their energies elsewhere in the community.

In about 1945 Mrs. C. Hollinger took the risk upon herself to teach the girls 10-14 to sew and knit. The 4-H Sewing Club was formed. There were about 15 members and later this number increased.

We would work from 3:30 to 5:30 after school. There were first, second and third year students, We would advance each year and make samples plus an apron for the first year, a blouse or skirt for the second year and a dress for the third year.

In the Spring an Achievement Day was held, work was judged and ribbons were awarded. The best items were sent to large exhibitions for more ribbons if entitled. The best first year and second year members would be entitled to summer camp in Grimly. The best third year member went to Winnipeg spending a week in the St. Regis Hotel and toured the city.

During the summer we marched in the Beausejour and Selkirk Rallies. The girls won first prize in Stonewall in 1955. The girls also participated in marching and Rallies at Selkirk, Red River Exhibition and Beausejour.

The girls enjoyed social events such as organizing bingos, weiner roasts, Christmas Parties, and many events. They raised money and bought a Singer Sewing Machine. They enjoyed learning to sew, knit, and public speaking 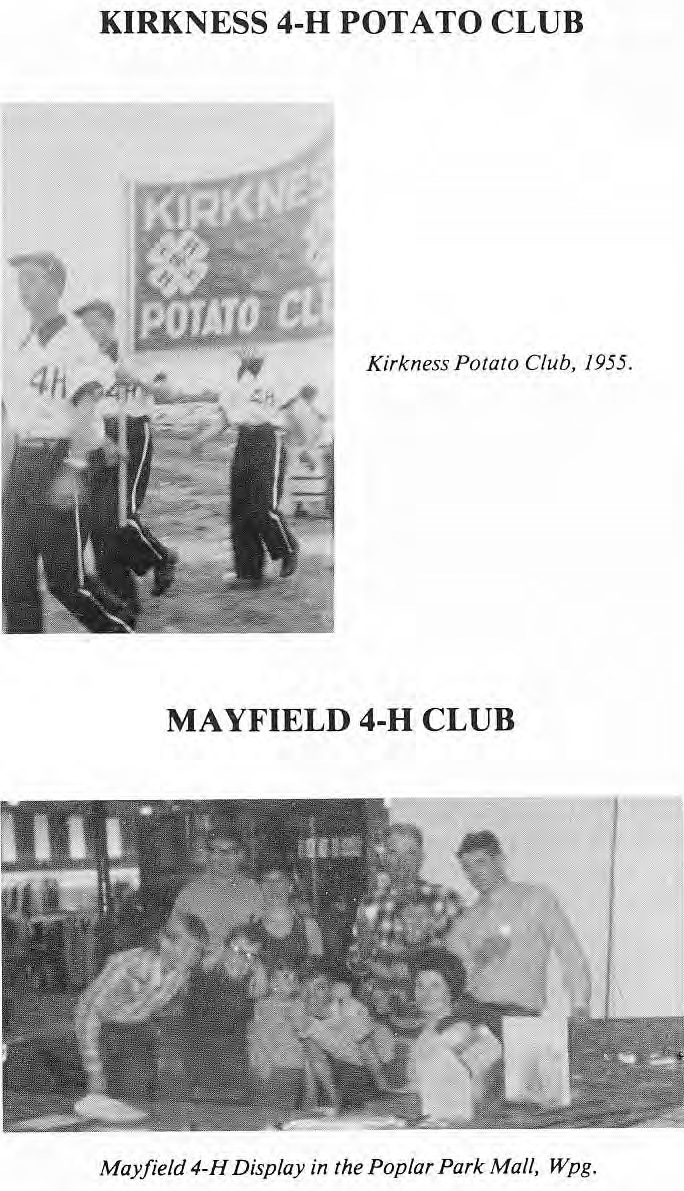 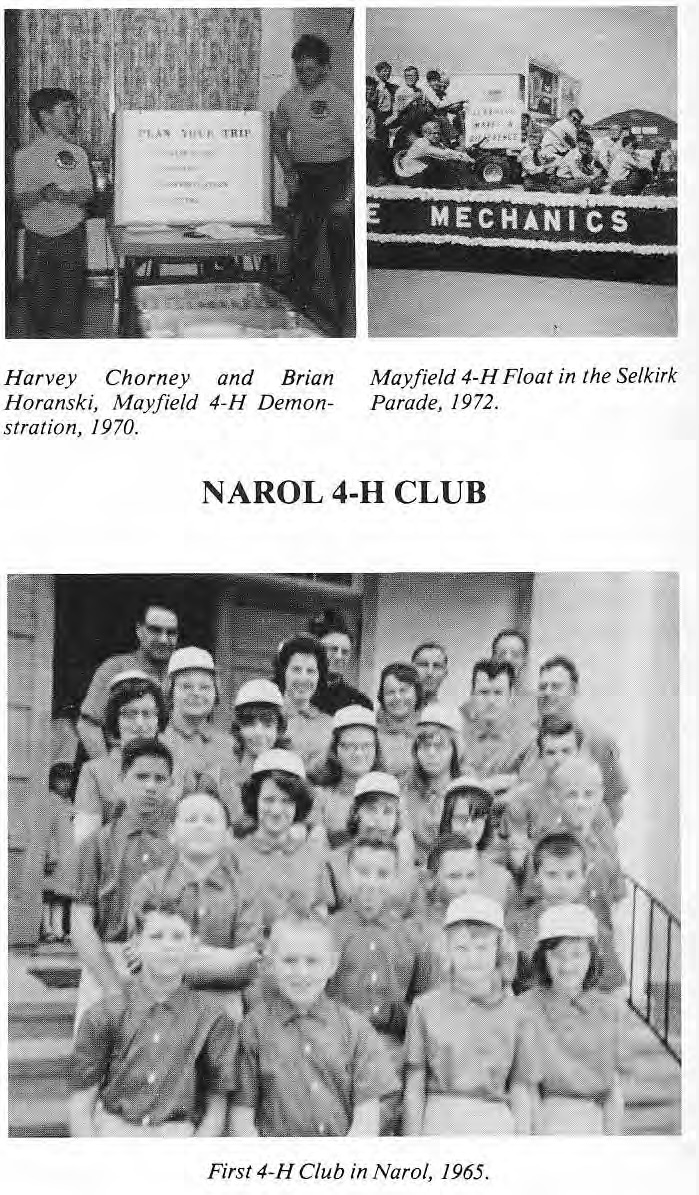 THE TRIALS AND TRIBULATIONS OF
A 4-H CLUB: THE RED RIVER SQUATTERS 4-H CLUB

ln looking back, I see 4-H as a two-way street. Certainly it meant many a fast meal and there were times when we would much rather have done something else; but it has taught us how to work and enjoy our children and the neighborhood children. Working with 4-H has brought it. out rewards.

It started about 7 years ago, when we were searching for a Club for our children, and I thought: “Why not start a 4-H Club in our District?”. After discussing the idea with Betty Kiyan, we sought out leaders willing to share their energies and talents. An information meeting was organized, and snowballed. Parents, Children, and Betty – at that time our 4-H aide -, scattered everywhere within our small home to exchange ideas; a club was in the making.

We weren’t sure whether we should first ask the children about the projects they were interested in and then look for a leader, or whether we should find leaders first. However we settled on lour different projects: Mechanics, Conservation, Foods, and Leather craft; and began with 7 leaders and 3l members.

We had difficulty that first year convincing some parents that they were not doing us a favor by letting their children join the Club; that we needed their help; and that the members should be allowed to run the business meeting, however imperfectly, in keeping with the4-H motto which is: “Learn to do by doing.”.

Our bouquets go out to our leaders for their endless time, patience, and the, sometimes use, of their homes. And how did our leaders volunteer? Often-times it was a draft; for example: 5 little girls wanted a food project; we considered the good cooks in the district, and chose Verna … “Verna, you’re our new leader”; Verna accepted our draft, and carried the project off well.

My husband Walter, Dave Enns, and Paul Schwede shouldered the responsibility of the Mechanics course; and Kurt Pampel took on the Conservation project. Of course there were problems; a lack of a heated garage hampered the Mechanics course and limited repairs to individual small engines rather than the machine as a whole, and the Conservation project was found to be a summertime project, although the children did learn the basics of hunter safety.

Gertrude Pampel and Nellie Schwede did a most effective job with Leather craft, and were always willing to help with the other aspects of the Club, whether it was a project, a ride, making calls and so on.

When it came time to think about the 4-H float for the parade, we received neighborhood antiques (butter churn, wool carding and spinning wheel, trunks, harnesses, dinner bell, and even a pair of original long johns) to spruce up our entry. And spruce it up we did, thereby receiving a first prize for the best 4-H float, and a first prize for the most original. lt was delightful to hear one old gentleman proudly exclaim: “That’s our Float!”, although it was a prized article of his that adorned the float rather than his child.

A leader who added much to our club and later was our head leader, and Secretary to the Selkirk District Council, was Angie Johnson. Angie had previously lived in our area but had moved to town. In deed, I had her interests in mind when I asked her to participate, for I felt she needed to work with children. Angie is a registered nurse, and when 4 of our senior girls asked for a Home Nursing project, she saw the need and would not say no. The girls adored her, and enjoyed and benefited from their project; one member of the Home Nursing project is studying nursing and is reaching out towards her career goal – identified through her 4-H project. Three of the girls, Gail Enns, Cindy Skrypnyk, and Patti McIvor did a 4-H demonstration on C.P.R., (Cardio-pulmonary resuscitation) learned in their project; Angie’s reward for the many hours and evenings spent preparing for the demonstration was when the girls received the Reserved Champion in the district level. Angie remarked with pleasure: “l haven’t been this excited since I graduated from nursing myself. “.

Gail Enns and Cindy Skrypnyk were responsible for the formation of the Mini Squatters when they took on a Self Determined project which involved working with children under the 4-H age of nine. l2 little Mini Squatters, ranging in age from 3 to 8 years, demonstrated at our Achievement on “How to run a Business Meeting”; and as one mother put it: “They sure taught me a few things on meeting management.”. The mini group continues today, nine members strong.

ln the following years, the Club became involved with Public Speaking competitions, and we were thrilled when Cathy McIvor was chosen Reserve Champion at district level with Sigrid and Susan Weans as close seconds; we added a Dog Project conducted by Nia Massey; and a Self Determined drawing project under the guidance of Ralph Massey; Ann Johnson shared her talents in Home Design.

Caroling began after an unintended solo of ‘O Canada took place at our first Christmas party this was not the way it was supposed to be, and so we took steps to rectal the situation using uhalerer perrua.ion was necessary, We ended with a carolling group consisting of Susan and Sigrid Weins, Susan Schwede, Jason Johnson, Cathy Mclvor, and my staunch supporter Angie. The reception to the group was overwhelming and we did not visit as many of the elderly and infirm .as we had intended. ln later years we had the assistance of three masters from the St. John’s Boys’ School and they were terrific; if our ethnic songs lacked anything in proper pronunciation, it was made up in harmony and enthusiasm, and at each house we left wreaths crocheted by the girls.

The older girls are now in High School and are exposed to many different opportunities. To keep them interested we have tried a short course in Easter Egg decorating, working in the Ukrainian tradition with raw eggs, which, as Joy Samborshki will testify, are very breakable.

Although the boys had dropped Mechanics, Glen Fey responded to their pleas to keep the club open by teaching a course in woodworking; this year they’ve each built something to keep, (Gregg built a desk, and Keith, a bench).

4-H is a very flexible program. Debbie Reid, Joy Samborski, Rhonda Semenko and Angie Skrypnyk are working on the project of “On Your Own”; and Angie with the help of one of the girls is also responsible for the nine mini squatters – varying their activities from handicrafts to speeches to outdoor fun.3 of the mini squatters are the children of our nerve lead leader and former 4-H’er. Helen Corkett.

Our own children varied in the length of time they belonged to 4-H. Our boys enjoyed two years; Cindy, our oldest daughter, got her five year certificate and is just now, when she is applying for Nursing, appreciating the help her 4-H background will give her; Angie, our youngest has been involved with the Club an official 6 years, and an additional, unofficial 3.

I do not know where we will go from here. Certainly we will emphasize carolling and mini squatters, but with our membership up-and-downs we must remain flexible and determined, and just continue to plug along focusing on quality and satisfaction.
Come September, two things start: School and, 4-H.